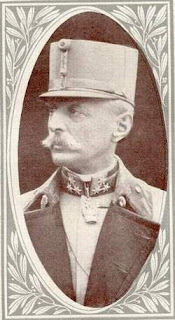 Stefan Baron Sarkotic of Lovcen was a Croatian general in the Imperial-Royal Army of Austria-Hungary and served as Governor of Bosnia and Herzegovina during the First World War. He was born on October 4, 1858 in Sinac, Otocac to army Lieutenant Matija Sarkotic of the Second Otocac Border Regiment. He went to school in Senj and joined the army, serving in Herzegovina before being promoted to captain in 1889 and attached to the General Staff in Vienna. He learned Russian and was entrusted with the position of an intelligence officer and journeyed to Serbia, Bulgaria and Macedonia to gather information on these countries. He then went back to regimental service and was promoted to colonel and in 1912 was made a general and given command of the VI Royal Hungarian Honved District.

At the start of World War I he served in the initial campaign against Serbia and for his meritorious service was decorated with the Order of the Iron Crown and later succeeded General Oskar Potiorek as military commander of Bosnia-Herzegovina, the first Croat soldier to hold that position. He recognized the nationalist danger presented by the pan-Slavic ideas and urged Austria-Hungary to implement reforms to negate the danger. One of the ideas he put forward was akin to earlier ideas floated about the creation of a south-Slav state within the Hapsburg Empire but the Hungarian government would not hear of it. In 1916 he led the offensive into Montenegro and within a week had occupied the capital city for which he was awarded the Order of Leopold and given the Hungarian noble title of Baron of Lovcen. The following year he was promoted to Colonel General and remained in command in Bosnia until 1918.

With the dissolution of the Hapsburg Empire Sarkotic was arrested along with other Hapsburg loyalists by the newly established Kingdom of Serbs, Croats and Slovenes (later Yugoslavia). This naturally did nothing to diminish his staunch opposition to Serbia and the new Yugoslav state. When he was finally released from prison he moved to Vienna where he continued to voice his opposition to the Kingdom of Yugoslavia and cooperated with Croatian resistance groups operating in exile in Austria. He was also the leader of the Croatian Committee which would later come to be dominated by the notorious Ante Pavelic who allied with Fascist Italy and Nazi Germany to eventually create an independent Croatian monarchy during World War II following the Axis invasion and breakup of Yugoslavia. What the old Baron would have thought of this can only be speculated at as he died still in exile in Vienna in 1939.
Posted by MadMonarchist at 12:27 AM