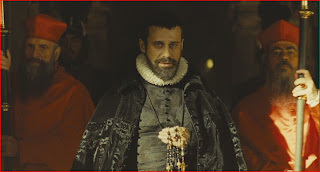 From my own experiences the film “Elizabeth: The Golden Age” has elicited extreme reactions from everyone save the critics, most of whom shrugged it off as blunt and lackluster. Others, however, either adamantly love it or hate it with few feelings in between. For those who love it, the primary motivation is the English triumphalism on display and the very sympathetic portrayal of Queen Elizabeth I, one of, if not the, most celebrated monarchs in English history. However, I want to take a minute to look at the part of the villain of the movie; King Philip II of Spain.

In short, I thought the role was atrocious. Catalan actor Jordi Molla was given the part and played it well (he is a talented actor which few would deny) but the figure on screen had seemingly nothing in common with anything we know about Philip of Spain. The casting of Molla seems an odd choice. I have often heard that, an actor must have sympathy for his character, even if a villain, to play the part well. In this case, based on the interviews he gave, Molla seemed to have nothing but contempt for his character and that seems to show on screen but is also, perhaps, not surprising coming from a liberal actor who does not seem to have much respect or affection for the two things that King Philip loved and respected above all else on earth; namely Spain and the Catholic Church.

Philip II is portrayed as such a one-dimensional character as to be downright cartoonish. Flanked by whiskery monks and constantly clutching a rosary he creeps about his castle alternating between shouts and whispers calling his enemy a “whore”. He shrinks back from sunlight and is ever in the shadows and always dressed in black. Designed to be the picture of a religious radical he is constantly using the words of a crusader but takes his spiritual direction from a candle in his room; if it burns calmly upright God is pleased but if it flickers God is angry. Obviously it would not take an extremely intelligent person to realize that simply shutting the windows would ensure everlasting Godly favor using this method of divination!

Then there is the numerous historical inaccuracies, made, I suppose, to simply add to the villainy of the character, but all quite untrue. Philip was not flooding England with assassins and the whole myth of murdering priests has really become tiresome and should be put to rest. Even when something accurate is shown; such as the extent to which Spain was deforested to build the “Invincible Armada” one wonders whether this was done for the sake of accuracy or simply as another way of vilifying Philip II by portraying him as being an anti-environmentalist! On the whole, even if their aim was to make Philip look as evil as possible they still failed. The portrayal was so simplistic, so one-dimensional that he comes off looking more silly than truly threatening.

The movie was meant to be a glorification of Elizabeth I of England and fair enough. But it should not be necessary to slander the name of Philip of Spain to glorify Elizabeth of England. Consider if the shoe were on the other foot? For Spain, the reign of Philip II was their “Golden Age” to a large extent and at least somewhat today and certainly before the wave of liberalism and secularism crashed in Spain the memory of King Philip II was honored just as much and as fervently by the Spanish as the memory of Elizabeth I is in England.
Posted by MadMonarchist at 12:38 AM