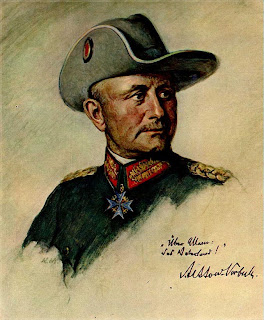 One of the most remarkable figures to come out of the Great War was German Major General Paul von Lettow-Vorbeck. He came from a distinguished family in the minor nobility of Pomern, entered the army and saw service in China during the Boxer Rebellion. Prior to World War I he was posted to command the colonial forces in German East Africa (modern Tanzania). When war broke out some wanted to offer little to no resistance but von Lettow was having none of that. He determined to fight and to tie down as many Allied troops as possible so that these forces could not be employed on more vital fronts and throughout the war he did precisely that.

Securing his reputation as one of the most brilliant irregular warfare commanders in history von Lettow defeated, evaded and tied down hundreds of thousands of Allied troops. As impressive, if not more so, than his strategic genius was his ability to supply and sustain his tiny army entirely by living off the land, improvising their own homemade materials and capturing enemy supplies. The combined forces of the British Empire, the Belgian Congo and Portuguese East Africa all failed to corner and defeat von Lettow and his ragged force of African soldiers and German officers. He ended the war with a spotless record, the only German commander to successfully invade British territory, laying down his arms only after he was informed that the German Empire had collapsed.

It was, however, his actions after the war that prompt his inclusion here. General von Lettow was an officer of the old school and while still with the post-war German army he placed his forces at the disposal of the monarchist leaders of the Kapp Putsch. The failure of this effort ended his army career though he could still be prominently seen on military occasions wearing his wide-brimmed colonial hat. The Great War in East Africa was fought with great chivalry and mutual respect and von Lettow became good friends with many of his former enemies. Because of this, Adolf Hitler offered him the post of ambassador to the UK but von Lettow refused to serve the Nazi regime in any capacity.

Because of this Hitler had him placed under strict surveillance (one can also imagine that Hitler was not as enthused as some others about the old general’s war record considering that the bulk of his army were Black African soldiers). The Second World War left von Lettow destitute but his former enemies in Great Britain came to his rescue and donated enough money to pay him a pension in his final years. When West Germany recovered he was able to enjoy a comfortable living again and even visited East Africa one last time where he was warmly received by the veterans who had once served under his command. He died in 1964 a celebrated war hero, admired by friend and foe alike and a loyal servant of his king and Kaiser.
Posted by MadMonarchist at 12:28 AM