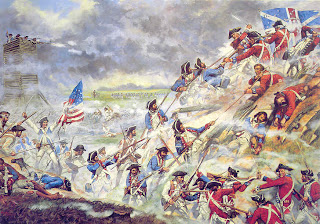 One of the lesser known engagements of the American Revolution was the siege of Ninety Six, South Carolina in the summer of 1781. Lasting a total of twenty eight days it was the longest siege of the Revolutionary War. It was a battle which also displayed the extent to which the conflict was a civil war as almost all of the participants were American colonists; Whigs supporting the new United States government on one side and Tories loyal to King and country on the other. At the remote outpost of Ninety Six played out a showcase of the political struggle which had long divided the American colonies; opposing adherence to revolutionary republicanism or traditional British constitutional monarchy, one or the other of which would necessarily perish.

Today, Ninety Six, South Carolina is a small, quiet town; an average picture of the American deep south. However, in 1781, Ninety Six was the most prominent settlement in the backcountry of South Carolina; a frontier outpost that was the center of military activity in the region. On May 12, 1780 Crown forces under Lieutenant General Sir Henry Clinton had captured the vital port city of Charleston, South Carolina in one of the most stunning defeats suffered by the American revolutionary forces during the war. General Charles, Earl Cornwallis was left in command with the aim of marching north in a campaign to restore the southern colonies to Crown control and rally the many loyalists of the region to fight alongside the British.

In embarking on this operation, Lord Cornwallis divided his army into three columns which were to secure Camden, Augusta and Ninety Six. British and loyalist forces secured the post and established a garrison there at the stockade fort. Lieutenant Colonel John Harris Cruger, himself an American loyalist, was placed in command. When Major Patrick Ferguson and his loyalist forces were beset by rebel troops at King's Mountain, Ferguson called on Cruger for help but all of his messengers were intercepted. Ferguson and his force were annihilated with many of the survivors being massacred by the revolutionaries. Nevertheless, Cornwallis continued his advance north. Garrisons were left at Charleston, Camden, Augusta and Savannah as well as Ninety Six to hold South Carolina. The area was left under the overall command of the capable Lieutenant Colonel Francis, Lord Rawdon.

The Crown forces soon came under renewed attack by revolutionary forces under General Nathanael Greene. Supported by the notorious rebel guerilla leader, Francis Marion a.k.a. the Swamp Fox, Greene took a position on Hobkirk's Hill near Camden. Despite being heavily outnumbered, Lord Rawdon attacked Greene and defeated him in a hard fought battle. Although he had been victorious, Rawdon had taken heavy losses which could not replace. He therefore decided to pull back and conserve his forces around Charleston. Soon, in the face of unrelenting rebel pressure, every Crown post in South Carolina had fallen to the enemy with the sole exception of the small loyalist garrison at Ninety Six.

Realizing that the position would be nearly impossible to hold under the circumstances, Lord Rawdon sent orders to Lieutenant Colonel Cruger to evacuate his forces to Charleston. However, rebel troops intercepted all of his messages and without any other orders, Cruger grimly determined to defend Ninety Six to the last in the middle of a sea of revolutionaries. With only 550 men, consisting of loyalist provincial troops from New Jersey, New York, South Carolina loyalist militia and black pioneers, Cruger constructed an earthen star fort on the opposite side of the village of Ninety Six as the stockade fort with his soldiers and slaves borrowed from farms in the vicinity. The fighting between the rebels and loyalists had always been fierce, and everyone in Ninety Six knew they could expect little mercy at the hands of the rebels if they should be taken alive.

On May 21, 1781 General Greene arrived with about 1,000 men. Despite having the loyalists greatly outnumbered, Greene knew from the new fortifications that a direct assault would be all but impossible. In an attempt at psychological warfare, a New Jersey loyalist recalled how Colonel "Light Horse Harry" Lee paraded the Crown prisoners they had taken at Augusta with flags revered and mocking music to humiliate the prisoners and intimidate the loyalists in Ninety Six. However, his tactic had the opposite effect and the display only encouraged the loyalists to resist all the more rather than surrender and become objects of ridicule for the rebel forces. The fact that most of the men in Ninety Six were loyalists who were only too aware of the rebel atrocities against other loyalists, harassing civilians and slaughtering prisoners and wounded men, also instilled in them a resolve to fight on long after many other soldiers would have reasonably given up.

General Greene decided to lay siege to Ninety Six and enlisted the help of his Polish engineer Colonel Thaddeus Kosciuszko who supervised the sappers in building several approaches and parallel trenches to encroach upon the star fort. The loyalists were quite amused on one occasion when Kosciuszko bent down to inspect a mine and was wounded in the buttocks. Both sides suffered mightily in the intense heat and hard conditions. The clay was very hard to dig through and the Crown forces began to suffer from lack of water. The loyalists tried to dig a well in the middle of the star fort but without success. At first, the rebels were brazen enough to try entrenching a mere 70 yards away from the Star Fort. Colonel Cruger quickly sent troops out to attack the work party and drove them off, taking all of their tools. Taught a lesson by this, the next entrenchments were started at a wiser distance of about 200 yards. On June 3, the revolutionaries finished their second parallel. The Ninety Six garrison was forced to send out slaves, stripped naked, to bring in supplies under the noses of the rebels who could not see them in the darkness among the many felled trees.

On June 10 the revolutionaries finished their third parallel, which brought them within musket range of the Crown defenses. The fighting increased but the loyalist canon fire did a good job of holding off the rebel troops. In an effort to neutralize the Royal Artillery, on the night of June 13 the revolutionaries built a 30ft log tower, as they had done earlier in a tactic used since ancient times, upon which to place their infantrymen to fire down on the Crown gun crews. However, the move was not entirely successful. Nonetheless, on June 17 the loyalists had to abandon the stockade fort and Colonel Cruger began to worry that his end was in sight. Fortunately, his appeals for help were able to get through, though General Greene was able to intercept information that Lord Rawdon was then marching to the relief of Ninety Six with 2,000 Crown troops. Faced with this news, General Greene decided that he would have to attack Ninety Six before Lord Rawdon arrived. Greene ordered the notorious guerilla leader Thomas Sumter to intercept Rawdon, but the Crown forces eluded him and continued toward Ninety Six unhindered.

On June 18, at noon, Colonel "Light Horse Harry" Lee occupied the stockade fort west of town with his legion. General Greene then attacked the star fort from the third parallel under cover of artillery fire. However, the 10-12ft thick earthworks proved to be too strong for the rebel artillery. In preparation for the assault, General Greene sent 50 men forward with axes to cut through the obstructions and sharpened stakes surrounding the fort. Men with hooks sliced through the sandbags on the parapets and Colonel Cruger, desperate to ward off the attack, sent troops into the ditch surrounding the fort where fierce hand-to-hand fighting broke out as revolutionary and loyalist Americans struggled for control of the approach to the fort.
It was vicious combat, but with his advance troops faltering, General Greene planned to launch a general assault in a desperate effort to overwhelm Ninety Six. However, on June 19, Greene spotted cannon fire from the hills to the east. Lord Rawdon was announcing his imminent arrival which encouraged the loyalists under Cruger to fight on and demoralized the revolutionaries. Having already taken heavy losses and facing the prospect of being crushed between Cruger and Rawdon, General Greene decided to take his exhausted and bloodied army and retreat. On June 20, before daybreak, Greene slipped away across the Saluda River before Cruger and Lord Rawdon could give chase.

With Lord Rawdon in Ninety Six and Greene safely away, both sides could take stock of their losses. Lt. Colonel Cruger and his 550 loyalists had lost 27 men killed and 58 wounded. Greene, on the other hand, suffered much more. Out of the 1,000 men Greene brought to Ninety Six he lost 58 men killed, 70 wounded and 20 missing. However, in spite of inflicting such a costly defeat on General Greene, Lord Rawdon still had no intention of trying to hold Ninety Six indefinitely and by the next month the Crown forces had abandoned the post and taken up a more compact position on the coast. Loyalist families followed the troops, knowing from first-hand experience the persecution they would endure at the hands of the rebels without Crown protection. The siege of Ninety Six stands as a testament to the divided loyalties among all Americans at the time of the Revolution and the extreme brutality this encouraged. The loyalists forces inside Ninety Six fought with a determination born out of the knowledge that they were not just fighting for a cause, but fighting for their lives and their performance was brilliant and heroic.
Posted by MadMonarchist at 12:24 AM