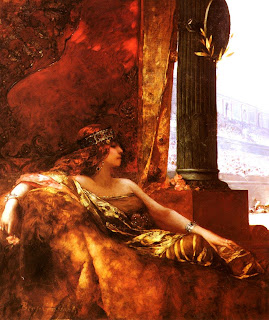 Empress Theodora, one of the most dynamic women of her time, remains to this day probably the most famous Byzantine empress in history. Like her husband, Justinian I, she is a saint in the Eastern Orthodox Church and is venerated every year on November 14. Her origins are a mystery, probably being born sometime in 500 with her birthplace listed by various sources as Crete, Cyprus or Syria. In any event she was of humble origins and originally was a dancer in the circus. When business became bad she was forced onto the streets in Egypt where, hungry and penniless, she was taken in by the monks of a nearby monastery who she received care, accommodations and became converted to what is known in the west as the monophysite heresy.

Eventually she met Justinian, a general in the army of the Eastern Roman Empire, and became his mistress. Justinian loved her fiercely despite her background and raised her to patrician rank. He was drawn to her rustic simplicity, her pale, petite figure and her captivating eyes. He finally married her and showered her with affection and lavish gifts. In 527 Justinian became Augustus of the East Roman Empire and Theodora was crowned with him as Empress. While he was absorbed with his goal of regaining the entire Roman Empire she dealt with religious matters and was determined to promote a monophysite patriarch of Constantinople. Justinian was Orthodox of course but he gave Theodora considerable powers and neither was said to make a move without the consent of the other, ruling more as partners than sovereign and consort.

In relations with the Church in the west she helped orchestrate the elevation of Pope Vigilius on the understanding that he would favor her beliefs. However, once installed on the Petrine Throne he had a change of heart and refused to change anything. In a rage Empress Theodora had him arrested and brought to Constantinople, but he never gave in and eventually outlived the Empress. In the east her courage and decisiveness were instrumental. It is no exaggeration to say that by her leadership she saved the throne of her husband during the Nika riots which threatened to topple Emperor Justinian.

Together with her husband Empress Theodora oversaw the rebuilding of Constantinople into one of the most spectacular cities in history. She helped in the building of hospices, churches and refuges for the poor. She is also credited with influencing new laws to protect women, making rape and kidnapping capital offenses, no matter if the woman was noble or common born. Women could not be forced into the entertainment industry or prostitution and could not be put in prison for debts. Instead they were to be placed under the supervision of religious women to work off their debt. This was necessary because of the rape and abuse women often suffered in prison. She cracked down hard on prostitution, buying the freedom of many girls herself, meting out harsh punishment to their captors and setting up establishments to help them get back on their feet in legitimate ways.

Empress Theodora died of cancer on June 28, 548 and was buried in the Church of the Holy Apostles. Emperor Justinian was extremely distraught by her loss and continued to work for religious unity between the monophysite and Orthodox camps. Her religious policy could be seen as damaging but her willingness to work within the established framework has also been pointed to as something which kept the east and west from separating sooner. Nonetheless, what can be said of her is that she was a pioneer of sorts in the fair treatment of women and it is largely thanks to her that women in the Eastern Empire had more rights than those in any other part of the world at the time. She was a beloved and valued consort to one of the greatest monarchs of the Byzantine Empire and during whose reign Constantinople came about as close as she ever did to fully recovering the glories of the old, united, Roman Empire.
Posted by MadMonarchist at 12:56 AM