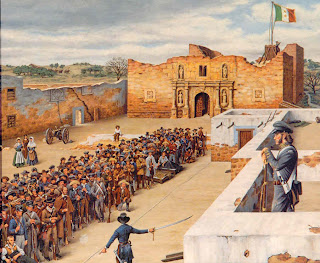 On this day in 1836 the epic 13-day siege of the Alamo began in San Antonio, Texas. A Mexican army of roughly 5,000 men arrived and demanded the surrender of the old Spanish mission defended by 185 Texans which Alamo commander William B. Travis answered with a canon shot from his largest gun. In response Mexican general Antonio Lopez de Santa Anna raised a red flag over San Fernando Church as a signal to both sides that he would show no mercy; that this would be a fight to the death. Santa Anna gained fame (or infamy) in Mexico early on when he betrayed and led the overthrow of Emperor Agustin I. Coming to power as a federalist president he turned his coat, as he frequently did, and declared himself a centralist. Assuming the position of a dictator, he tore up the constitution of 1824 which prompted the outbreak of rebellion in Texas. When his brother-in-law was forced to surrender San Antonio he made that city the focus of his counter-offensive to restore Mexican rule in Texas and kill or drive out the local, mostly Anglo, population.

Many of those who participated in the campaign in Texas would go on to serve in the Second Mexican Empire of Maximilian such as Colonel Juan Almonte and Quarter Master General Adrian Woll. Santa Anna placed his artillery and began shelling the Alamo while inside Colonel Travis sent dispatches calling for help from the colonies in Texas. Today the Texas First Lady was on hand at the Alamo to launch a new fund-raising drive. The Alamo is cared for by the Daughters of the Republic of Texas, a group of ladies descended from the first families of Texas, and it is worth noting in these days of rampant government spending that this "shrine of Texas liberty" has been well cared for all these years by the DRT with no money from the taxpayers and without charging admission. It goes to show how much better things can be when entrusted to those who have an ancestral bond with a cause rather than those doing a job simply because the government pays them.

Posted by MadMonarchist at 2:24 PM