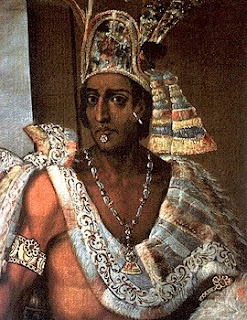 Montezuma II, Emperor of the Aztecs, is one of those figures from history whom most know in passing. They know him as a failure, as an unpopular monarch and as the last Aztec emperor. In fact, all of these assumptions are incorrect, at least to some degree as can be assessed by separating fact from opinion. The popularly held image of Montezuma II is to a large degree tainted by the fact that he had the misfortune to rule during the time of the arrival of the Spanish, after which life in Central America would never be the same again. It has become, because of this, rather difficult to separate Montezuma from that defining historic event.

We do not know when exactly Montezuma was born but an often speculated year is sometime in 1466. His father was the Emperor Axaycatl though he did not immediately succeed him as the Aztecs did not have binding rules of direct hereditary succession. Rather he succeeded his uncle, Emperor Ahuitzotl in 1502 (10 Rabbit in the Aztec calendar). His name, Montezuma II (to differentiate him from an earlier ancestor of his who was also named Emperor Montezuma) has been translated as the ‘Eternal Almighty Lord of Majestic Anger’ or something along those lines. Far from being an ineffective failure as a monarch, an image based on the very end of his reign, we see that Montezuma II was actually a feared and respected ruler who took his duties very seriously and under his leadership the Aztec Empire reached its zenith of size and power.

It would be difficult for us today to imagine what life was like in the world of the Aztecs. They dominated the central valley of Mexico and artifacts indicate that they had intermittent (at least) trade with the Native American nations far into North America and South America alike. They were ingenious agricultural engineers, builders and astronomers. The capital city, Tenochtitlan, rivaled even the Eternal City of Rome in size and splendor. An observer would have seen Emperor Montezuma II treated almost as a god himself. Adorned with precious stones and rare feathers, surrounded by his many wives and 200 elite bodyguards, his person was sacred. Carried on a palanquin or having precious coverings laid in his path as he walked his feet never touched the ground.

Montezuma II was, by the standards of the quite brutal Aztec beliefs, a very religious man. He consulted his priests on all important matters, embellished the temples of the city and human sacrifice was constant. Today it has become fashionable to downplay this element but besides damaging the truth it insults the Aztecs as well for it was the heart and center of their religion and they considered it essential. Wars were fought as much to gain prisoners for sacrifice as to gain land or power. Prisoners were led up the steps of the Great Pyramid almost constantly as sacrifice was deemed necessary to even make the sun rise. During high religious festivals blood flowed down those steps in rivers. I will not go into all the details (and I could go into quite gruesome detail) but that much at least should be kept in mind when one hears the Spaniards who put a stop to it all being condemned too harshly.

It is not concretely known how many wives and concubines Montezuma II had, or even exactly how many children though the number is usually set at 19; 8 girls and 11 boys. As Emperor he gave more power to the nobility and tried to raise the status of the monarchy from forbidding commoners to set foot inside the royal enclosures even for the most menial employments. During his reign he launched wars against the Xoconosco in what is now the state of Chiapas and Tehuantepec, the Zapotec and the Yopi, conquering them all and bringing them into the Aztec Empire. Suffice it to say that by the time the Spaniards arrived Montezuma II was the most powerful man in all of Central America and feared and revered as such.

Hard facts are difficult to come by with Montezuma but one common story is that all of this success had an effect on him and he became rather paranoid and fatalistic. There were reportedly signs in the heavens that his soothsayers warned were ill omens and for which the priests advised more sacrifice.

In any event, the Aztec world was turned upside down in 1519 when Hernan Cortes and the Spanish landed on the coast and began marching inland. Rumors flew; were these men or gods. It would be similar for us today to imagine Martians landing on the earth. Spies tried to inform Montezuma of the strange things they witnessed. These men came on mountains that moved across the sea (ships), had bodies made of stone (armored helmets and breastplates) and ran about on gigantic deer with no antlers (horses). In fact, some of the first to view Spanish cavalry thought man and horse were a single beast. Montezuma sent emissaries to meet the Spanish but neither side new what to make of the other.

The Aztecs were a warrior people and their conquests meant many subject peoples were willing to ally with the Spaniards for the chance of freedom from the Aztec yoke. One of the most important of these was the Tlaxcala and their alliance with the Spaniards sparked unrest and rebellions as well as outright attacks. Montezuma II sent gifts to the Spaniards as a way to show them his wealth and thus his power but this was likely taken as a sign of weakness and only spurred the Spanish on to find more. When they reached Tenochtitlan Emperor Montezuma met with Cortes and gave him VIP accommodations, treating him as an honored guest for several months.

At some point the Spaniards launched a coup and put Montezuma under arrest. This was not immediately known, but when the horrified Spanish broke up a sacrificial ceremony the people rose up against the Spanish presence in the city and attacked the royal enclosure. What happened next remains a mystery. The Spanish say that Montezuma was trying to calm the rioting crowd when he was hit in the head and killed by his own people. Aztec sources say the Spanish killed him before being forced out of Tenochtitlan. Whatever the truth, the fact remains that on that unknown day in June of 1520 Emperor Montezuma II died.

Another common misconception is that Montezuma II was the last Aztec emperor, when in fact there were a number after him. His sons were all killed during the war with the Spanish, some claim because they wanted to surrender but this is speculative. The reasoning could have as easily been to prevent infighting during the crisis. Through his daughters the descendants of the Aztec Emperor live on to this day as part of the nobility of the Kingdom of Spain.
Posted by MadMonarchist at 12:22 AM