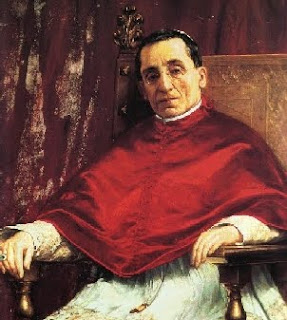 Giacomo della Chiesa was a small, frail man, known as "Tiny" while in the seminary, but as Pope Benedict XV he had the very big job of guiding the Church, fortified in doctrinal truth by Saint Pius X, through the horrific years of World War I. He had been a cardinal for only three months before his election as "Supreme Pontiff" but had considerable experience as a papal diplomat during the reign of Leo XIII.
The election of such a newly created cardinal was a clear indication, that particularly in the Europe of 1914, that the Church needed someone with the ability to negotiate with surrounding countries and deal with the problems facing the world in a very practical way. Benedict himself, being the little, compassionate man that he was, stood in total horror of the effects of modern, industrialized warfare.
Throughout the conflict, his entire energies were spent in the pursuit of an arranged, negotiated peace. To accomplish this, he adopted a strict policy of impartial neutrality. He refused to comment on any nation-specific charges of atrocities but spoke out at length on the cruelty and inhumanity of the war as a whole, urging all nations to cease and come together in reconciliation. He proposed that all conquered lands be returned to their former owners and that each nation pay for its own reconstruction. Neither side was pleased with his impartiality, calling him, alternately, the 'Boche Pope' and 'der Franzoesische Papst'. His calls for peace were ignored by all the major powers save Emperor Charles I of Austria and King Albert I of the Belgians (both devout Catholics) and their efforts were thwarted by their more powerful allies.
However, it must be remembered that, at this time, the Pope was still treated as a prisoner of the Vatican, and still claimed temporal authority over Rome and the Patrimony of St. Peter. This was significant in that, hoping to gain papal favor, Germany offered to restore Rome to the Pope after the eventual defeat of Italy. It also meant that his fellow Italians were anxious to prevent the Pope from having any voice in international politics.
Italy, rightly so, was afraid that if the Pope became the arbiter of European peace, he might seek redress for the illegal seizure of his own country in the preceeding century. Due to this, in one of the secret, under-handed agreements all too common at the time, Italy forced the other allied powers to agree, in 1915, that they would not deal or negotiate with the Pope at all. Thus, the war went on until 1918, and afterwards Benedict was even denied representation at the peace conference in Versailles.
Although greatly relieved that the war had ended, Benedict XV showed considerable foresight in his great displeasure with the peace terms. He viewed the Treaty of Versailles as an un-Christian act of vengance against Germany and could hardly have been pleased with the replacement of so many Catholic monarchs with anti-clerical, nationalistic, socialistic regimes.
Yet, the Pope was determined still to come to the aid of his beleagured flock. In fact, he all but emptied the Vatican treasury, giving some 82 million lire to aid the wounded, impoverished and homeless people left in the wake of the war. He also began trying to project a more open and friendly face of the Church and sent envoys across the continent to arrange concordats with the new governments to secure the future of the Church in Europe. In 1920 he even went so far as to officially allow other Catholic rulers to visit the King of Italy at the Quirinal (the former papal residence). He also allowed Catholics to participate in Italian politics once again, blessed the somewhat radical Catholic 'Partito Poplare', reconciled with France, which included the great canonization of St Joan of Arc in 1920 and encouraged the growth of trade unions to fight for workers. Sadly, not long after peace was finally secured in Europe, Pope Benedict XV died in 1922.
Posted by MadMonarchist at 1:05 AM