Mad Rant: The Pope in the U.K. 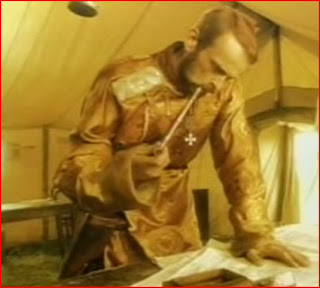 It was confirmed not long ago that His Holiness Pope Benedict XVI will be visiting England and Scotland sometime toward the end of this year, in part to mark the beatification of the venerable John Henry Cardinal Newman. However, if anyone thought Britain had left the days behind of a papal visit being controversial they would be sadly mistaken. A small but very vocal group of critics have already started condemning the papal visit well in advance of the pontiff's actual arrival, the date for which has not even been set yet. The Pope has made no effort to avoid the controversy, stating again recently his opposition to the anti-Catholic laws currently on the books. If you listened only to (mostly irreligious liberal) MP's you might think these would be the laws barring Catholics from the royal succession. However, the Pope seems more bothered by the laws which require Catholic adoption agencies to hand children over to homosexual couples.

So, gay activist groups and atheists who would oppose the pontiff simply for who his boss is, are planning the largest gatherings they can muster to protest the papal visit. Yes, these are the people most offended by the Pope coming to Britain. Even the Church of England has been nice and polite about the visit even though they have been rather upset as of late about the Pope throwing out the welcome mat for defecting Anglicans upset over gay "marriage", women priests and the renunciation of details like *the Bible*. Though, to be fair, the influx of conservative Anglicans going Roman has also upset liberal Catholics so the policy seems to be good for ecumanism all the way around. So, in a nutshell, these gay and atheist groups are upset with the Pope for (gasp) upholding Christian doctrine and refusing to change 2,000 years of tradition and teaching in his Church to conform with modern trends. Anyone else find this odd?

To hear these people go on about the adoption issue one would think that the Catholic Church in Britain had cornered the market on adoption agencies. Listening to them one would think that the Pope's strict adherence to Church teaching is putting a stop to all homosexuals from having a family. Of course, that is far from the truth. Gay couples can go to other adoption agencies (such as those run by the government) and given the Church position on homosexuality one would wonder why they would even want to give their "business" to any group associated with the Catholic Church. The truth, of course, is that these are but mere excuses by a group of people who oppose the Catholic Church and the Pope who leads it. I'm sure it must be frustrating for them; finally bumping into the one European sovereign who cannot be bullied or influenced, who remains the last legally and effectively absolute monarch in the western world.

They also have to deal with the little sticking point that the Pope has no means of actually enforcing his wishes, that the Catholic Church cannot even compel its own members to follow Church teaching much less compel anyone else to. They can, of course, through their pressure and numbers, pass laws to force the Catholic in Britain to fall in line, but they cannot force the Supreme Pontiff to change his position no matter what they do. They cannot silence him and they cannot intimidate him. After all, Benedict XVI formerly led the congregation once known as the Holy Office of the Roman Inquisition -those types do not tend to scare easily. Fearful that the people of Britain might get wise to all of these facts they have also tried to appeal to their pocket book and have voiced outrage at how much money the papal visit is going to cost British taxpayers. This, however, is, if anything, even more absurd. If they oppose the Pope coming to Britain on purely fiscal grounds (or really any other for that matter) they should blame their own Prime Minister Gordon Brown for extending the invitation to His Holiness in the first place.

I must say I have been glad that the C of E, while not exactly enthusiastic, has been at least as polite and welcoming as it has been. I would like this visit to be a line in the sand on behalf of the entire Christian community in Great Britain, Catholic or Protestant, on the basis that as they do not force anyone to join their ranks or accept their beliefs it will not be tolerated for the homosexual and atheist agitators to force sincere Christians to abandon their sacred doctrines in order to please them. Alas, given the state of Christianity overall in Great Britain, I cannot be too hopeful about that. If nothing else they should at least remember that England used to be known as the land of good manners and treat the Pontiff with all the respect due to a visiting sovereign and religious leader. If not, as long as they continue to try to destroy the religious and culture roots of Europe and the Christian west I shall remain just as opposed to resisting them every step of the way. And, I shall remain ...... The Mad Monarchist.
Posted by MadMonarchist at 12:37 AM