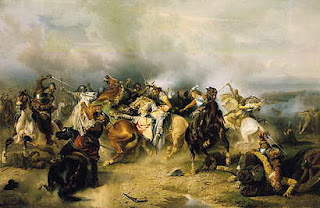 The Hackapell were a famous military corps of the Thirty Years War from Finland who fought in the service of the military giant King Gustavus Adolphus of Sweden. The troops were Finnish light cavalry and they took their name from their the Finnish battle cry, “Cut them down!” This caused their enemies to refer to the Finns in such a way because of their zeal in battle. They were first used in the wars between Poland and Sweden in the 16th Century. Many of the most famous names in Swedish military history came to glory leading these Finnish cavalrymen into battle including the likes of Field Marshal Jacob De la Gardie in Poland and Russia and Field Marshal Gstaf Horn in Germany.

Classified as light cavalry the Hackapell were normally protected only by a helmet and a steel breastplate or leather armor. This enabled the quick movements and lightning fast charges that they were famous for. They excelled at sudden, surprise attacks, raiding enemy camps and were often used for scouting and reconnaissance work behind enemy lines. Armed with a sword and a brace of pistols they would attack at full gallop, fire their first pistol at 20 paces, their second at 5 and then use their sword once upon the enemy. They were extremely well trained and even their horses were part of this, being taught to kick, stomp and bite at the enemy while in close combat. Their horses, much like those of the east, were small but sturdy and nimble.

During their most famous period of service the Swedish royal army included three cavalry regiments from Finland and their reputation was so fierce during the 30 Years War that prayers have been found in Catholic Churches in Germany asking for divine protection from the terrible Finnish horsemen. A march written for the Hackapell became so famous that German military bands still make use of it today. The image of the Hackapell also had great symbolic importance for the newly independent Finland as an honored part of their history they could point to for modern generations to emulate.
Posted by MadMonarchist at 12:16 AM