The End of Imperial China 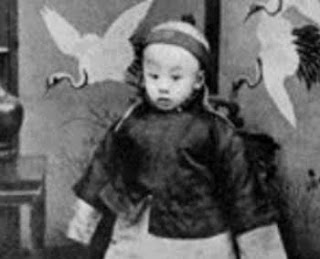 It was on this day in 1912 that His Imperial Majesty, Xuantong, “Great Emperor of the Great Qing Dynasty, Grand Khan of Tartary, the Lord of 10,000 Years and the Son of Heaven” formally abdicated, bring the Manchu dynasty and thousands of years of imperial tradition in China to an end. At the time the Emperor was only 6-years-old and was acted for by the Empress-Dowager Longyu who was quite out of her depth and had no one to turn to but the military strongman General Yuan Shihkai (who ultimately proved untrustworthy). In an alliance with the revolutionaries he was able to secure the abdication of the Qing in exchange for political power for himself. The downfall of Imperial China came in such a sudden, confused collapse that the true historical significance of it escaped many, and still does to this day. Consider for a moment that until February 12, 1912 there had been an Emperor of China continuously since at least 221 BC.

To give westerners a little context on this, consider that when the first Emperor of China came to the throne Hannibal had just become commander of the armies of Carthage, the Ptolemy’s ruled Egypt and the Roman Republic had just built its second circus. Carthage would rise and fall, Egypt would fade from the ranks of the great powers, the Roman Republic would become the Roman Empire, rise, divide, fall, come back as the Holy Roman Empire, rise, fragment and fall, the Ottoman Empire would rise, nearly conquer Europe and then fade into the background while all the while the succession of Emperors in China continued. Dynasties rose and fell but there was always a “Son of Heaven” on the Dragon throne until this day in 1912.

The scattered groups opposed to the imperial system had very little in common (which would ultimately lead to decades of anarchy among feuding warlords) but most agreed on racial xenophobia; hatred of the Manchurians was all they agreed on in many cases. It is, therefore, ironic that Sun Yat-Sen, who believed himself entitled to leadership in a post-imperial China, waved the Han nationalist flag while spending much of his life in the United States and coming back to China with a hunchbacked American lackey in a ridiculous uniform clanking with worthless medals who expected to become military commander of the new republic. All the ideas expressed were foreign and foreign advisors were never far from even the most rabid sounding nationalists.

Sun Yet-Sen even went to pay homage to the tomb of the last Ming emperor simply because he was the last Han monarch to rule China before the Qing dynasty came to power and Manchu and Mongol princes assumed the places of importance. However, we should not be too surprised at this. The same man who railed against the decadent Manchu court was a flagrant philanderer, the same man who called for freedom and democracy was an absolute autocrat who would have nothing to do with any organization or party he did not control and the same man who berated the widespread corruption of the late Qing period presided over a provisional government that set a new standard in graft, nepotism, cronyism and corruption of every kind.

On the other side of the thick walls of the “Great Within” the boy Emperor did not really know what monumental event had taken place either. Nothing much changed in his daily life and inside his Forbidden City he was still treated as the Lord of 10,000 Years, partly because not everyone was convinced all the sudden changes that had taken place would be permanent. Most elites tried to keep a foot in each camp and for the Manchurians and traditionalists at least there was still hope that after the novelty of the republic had worn off the people would come back to the system they had known for thousands of years. This was only the beginning of the troubles modern China would face, but it all started with the end of the imperial era, the end of the Great Qing, 98 years ago today.
Posted by MadMonarchist at 12:26 AM