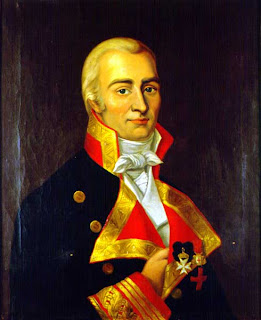 One of the leading Spanish royalists of the Hispanic-American revolutions was Jacques Antoine Marie de Liniers et Bremond, better known as Santiago de Liniers. He was born on July 25, 1753 in Niort, France to Captain Santiago Luis de Liniers and Enriqueta Teresa de Bremond. After moving to Spain he joined the Spanish Royal Navy where he served in Europe before being transferred to Montevideo, Uruguay in 1788. He came to local prominence following the British invasion of Argentina (an offshoot of the wars in Europe) when he was dispatched by the Governor of Montevideo, Pascual Ruiz Huidobro, to retake Buenos Aires from General William Carr Beresford who would later go on to fame as commander of the Portuguese forces in the Napoleonic Wars.

With regular troops from Buenos Aires and the Montevideo militia Liniers managed to defeat Beresford and force his surrender after two days of fighting. In thanks Liniers was named commander-in-chief of the local Spanish military forces and lieutenant-viceroy. In 1807, when the British invaded again Liniers joined with future rebel leader General Manuel Belgrano in forming a junta that imposed martial law, deposed the sitting viceroy and after withstanding a long siege defeated the British forces led by General John Whitelocke who surrendered on July 5, 1807.

In May of 1808 Santiago de Liniers was formally appointed Viceroy of the Rio de la Plata by King Charles IV of Spain in which post he served until August of the following year being beset by political enemies, revolutionaries and a slew of problems. The Viceroyalty of Rio de la Plata was soon beset by the famous May Revolution, the first step toward the Argentine wars of independence. Liniers was very popular with the local Creole population (native born people of Spanish blood) but unpopular with the Spanish-born elites, partly because of his French ancestry, and he made more enemies for his staunch support of the Spanish Empire and his opposition to the regime of Joseph Bonaparte. The Junta of Seville replaced Liniers with Don Baltasar Hidalgo de Cisneros but by the time he arrived the junta had fallen, the throne had changed hands and few accepted the new viceroy -thus starting the May Revolution.

A revolutionary junta was set up and in 1810 Liniers was involved in a monarchist plot to topple it but, that having failed, ever loyal, he launched a counterrevolution from Cordoba, Argentina to restore the authority of the Spanish Crown. However, despite the admiration Liniers held for his victory over the British, most in the area supported the revolution and his forces were bedeviled by sabotage and numerous desertions. Finally General Francisco Ortiz de Campo was able to defeat Liniers but, being a comrade of his from the days of fighting the British, he refused to have the blood of the celebrated Liniers on his hands. Mariano Moreno had ordered his execution for treason (against an illegitimate government of traitors -typical revolutionary hypocrisy) and so it was left to Juan Jose Castelli to do the deed. Santiago de Liniers was executed at Cabeza de Tigre, Argentina on August 26, 1810 -killed by revolutionaries for his loyalty to King and country.
Posted by MadMonarchist at 12:17 AM