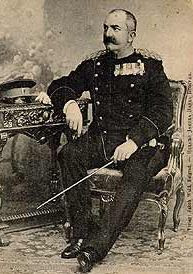 King Milan I of Serbia was the first monarch of the restored Kingdom of Serbia, an event which happened yesterday in 1882 which is when Prince Milan IV of Serbia became King. He was born on August 22, 1854 as Milan Obrenovic IV while the family was in exile in Moldavia thanks to the Karageorgevic dynasty. He was the grandnephew of the famous Prince Milos Obrenovic, leader of the second Serb uprising and founder of the Obrenovic dynasty. He lost his father at an early age and was adopted by his cousin Prince Mihailo.

When the House of Karageorgevic was overthrown in 1858 Prince Mihailo became Prince of Serbia in 1860 when his father, Prince Milos, died. Prince Milan to study in Paris. In 1868 Prince Mihailo was assassinated and the 14-year-old Milan succeeded him as Prince Milan IV of Serbia with a regent to rule during the remainder of his minority. When he came of age in 1872 he took control of the government himself where observers noted his intelligence, ambition and determination.

In light of the events in the Balkans following his life one of the most remarkable things about Prince Milan was his foreign policy in which he tried to maintain a balance of good relations with both the Russian Empire and the Dual Empire of Austria-Hungary. Following the Russo-Turkish War of 1877 Prince Milan called for the recognition of Serbian independence in the Treaty of Berlin. In 1882, with the support of the Austrians, he was proclaimed King Milan I of Serbia.

A far cry from the way things later turned out, the new King of Serbia busied himself with improving the national infrastructure, industry and building up the military and all with the support of the Emperor of Austria. However, all of the costs associated with this buildup and the establishment of an independent Serb government led to large increases in taxation which caused King Milan to lose popularity. More people also turned against his foreign policy, blaming the problems on the influence of Austria and calling for closer ties to Russia; part of the pan-Slavic movement that was in vogue at the time.

More bad news followed with a war against Bulgaria that was a disastrous defeat, increasing economic problems and plentiful royal scandals with King Milan being known for his infidelities and a difficult divorce from his wife. However, he seemed to get a handle on the situation, enacted a more liberal constitution and then unexpectedly abdicated in 1889 in favor of his son and retired to Paris. The situation became chaotic in Serbia. The pro-Russian faction gained power and there were divisions as to whether or not the former King Milan might try to return. He finally did return as commander of the Serbian army under King Alexander in which position he was of great service.

However, the marriage of Alexander was opposed by Milan and he resigned his command and Alexander had him exiled from Serbia. King Alexander firmly placed Serbia in the Russian camp and former King Milan retired to Vienna where he died on February 11, 1901. The situation in Serbia continued to deteriorate however, and only a year after the death of his father King Alexander was assassinated in a military coup which brought the Karageorgevic dynasty back to the throne in the person of King Peter I.