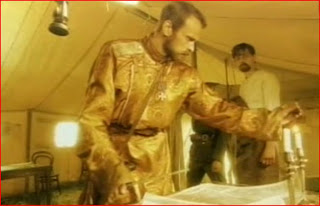 It was recently reported (by Fox News Channel at least) that the “Tea Party” movement has spread to Great Britain. The first such tea party will be held in Brighton with the main attraction being conservative MEP Daniel Hannan who is most famous for the eloquent dressing-down he gave Prime Minister Gordon Brown in Strasbourg in 2009. There are many things I like about Mr. Hannan and a great many things I agree with him on like cutting government spending and opposition to the EU. There were some things he has said that smelled bad to me but I attributed it to the fact that he said them on American television and was likely trying to ‘make nice’ with the host. After a while though a mad man has to start to wonder…

I should also say that in general I am in favor of these tea parties as have been breaking out in the US since the TARP fiasco. However, all of that aside, I have to say there is something I find rather off-putting about the idea of anything being called a “tea party” being held in Great Britain. I am generally in favor of that which is being advocated by the tea parties but, in Britain especially, could they not find an example to follow in their own history rather than borrowing from America?

This, I assure you, is not because of any jealousy on behalf of the Boston tea party (probably would have been on the other side of that little bit of vandalism) but because I hate to see European “conservatives” following the example of American “conservatives”. Liberals in the US have long followed the example of European liberals because they are further down the socialist path than America. The same could not be expected on the right for the simple reason that there is hardly any real conservatism left in Europe these days and because American conservatives can, by the nature of the founding of the country, go right only so far as the Revolutionary War will allow them.

However, real traditional conservatism came from Europe; they should have plenty in their own history to draw from that is even the more legitimate “real thing” than what the most right-wing folks in America can muster. The whole idea of a tea party in Britain sounds like something anti-war Whigs would have done in 1776 to thumb their nose at Lord North and King George; not something done by what will probably be a mostly Tory crowd in Britain today. I don’t like people who blame everything on America nor do I approve of those who wish to follow the American example in absolutely everything. Surely in the long history of Great Britain there is something in their own tradition they could adopt instead of borrowing from a group of people who were actually the enemies of Britain? I still wish them the best of course, I also wish they would do something a little more “British” and monarchial and of course I am … The Mad Monarchist.
Posted by MadMonarchist at 12:45 AM