New Tiara for the Pope 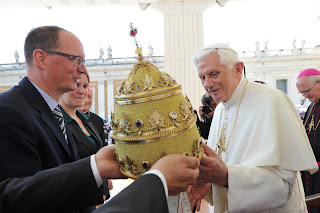 First, a nod of the head and dug of the forelock to Ad Orientem where I first learned of this. HH Pope Benedict XVI has been presented with his own papal tiara, paid for by German businessman Dieter Philippi and constructed by artisans in Sofia, Bulgaria, symbolic of the hope emphasized by Benedict XVI for greater unity between the eastern and western Churches (always a good thing in my book). It is even odds if the Pope will ever actually make use of his new tiara but I would consider it only polite to do so -don't want to seem unappreciative of such a gift right? The absence of a papal coronation in recent decades is one of the losses I mourn in western civilization. Of course, as most know, Pope Benedict XVI has adopted a much more "traditional" style compared to his predecessors on the Petrine throne and it was said that he had wanted to have a coronation but was told that it would be impossible to organize at such short notice after his election. So, next time, -no excuses! Plan it out in advance and now there is one more crown to choose from to use in the coronation. I would like to think that Benedict XVI would find occasion to wear this one but, I also don't want to get my hopes up. For his eventual successor, to be crowned with Benedict's tiara would be a nice tribute to the Pontiff would it not?

As most know it was Pope Paul VI who was the last to have a coronation and the last to make use of the papal tiara (he surrendered his at the end of Vatican II). The smiling, short-lived Pope John Paul I had none and Blessed Pope John Paul II said that, while it was proper to have a coronation, it was not appropriate to do so at his time because of the recent, tragic loss of his predecessor. However, not many know that Bl. John Paul II did have a tiara of his own. It was more traditional than that of Paul VI but still rather simple when compared to others as it was made in Hungary, behind the "Iron Curtain", smuggled out and presented to the Pontiff as a symbol of the determined faith of the Catholic Hungarians. It was never worn of course and its existence only made public after the end of the communist regime. Pope Benedict's tiara was presented to the Pontiff at his Wednesday general audience by a delegation of Catholic and Orthodox pilgrims in the name of Christian unity.