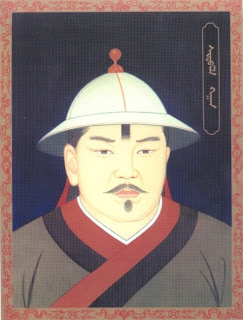 Shidebala, Gegeen Khan, Emperor Yingzong of the Great Yuan, was the son and heir of Ayurbarwada Khan and his accession is the sole example of the throne of the Yuan passing peacefully from father to son throughout their reign. Ever since the Mongol conquest of China the throne had passed back and forth between those who favored adopting aspects of the Chinese civilization to solidify and maintain their empire and those who felt that success would only come by holding fast to their Mongol traditions which had brought them to power in the first place. As we have seen, Temur Khan was (slightly) more inclined to Chinese methods, Khaishan Khan ruled in nomadic Mongol style and Ayurbarwada had swung back the other way to heavily favor Chinese administrative policies. The reign of Shidebala was to see this division continue and tensions ran very high between the two factions, each convinced that their way was the only way that the Yuan Empire could be maintained. For Shidebala it would result in tragedy.

Shidebala was born on February 22, 1303 to Ayurbarwada Khan (Emperor Renzong to the Chinese) and his wife Radnashiri of the Khunggirad clan. His early life was dominated by his grandmother the empress-dowager Targi and her favorite minister Temudur, a rather villainous fellow who was appointed tutor to the young prince and his grandmother worked to assure his eventual accession to the Mongol throne. His father, however, had taken care that he be educated in Chinese style as well so as to continue his policies of reliance on Confucian doctrines and traditions, suitably Chinese, to rule China. In 1316 he was declared crown prince and heir to the throne and on April 19, 1320 he succeeded his father Great Khan of the Mongols and Emperor of the Yuan Dynasty. For the empress-dowager it seemed that all had gone according to plan and she could become the effective ruler of China and the vast Mongol dominions.

Convinced that they could dominate the young emperor, Empress Targi and in particular Temudur, were quick to enact their own policies and Temudur began exacting revenge against his own political enemies. Also targeted by him were the pro-Chinese supporters of the more Sino-oriented policy set down by Ayurbarwada. However, Shidebala was not the helpless babe many took him for. He was Chinese educated and tended to favor Confucian policies of administration (the Chinese did have a pretty long and successful record when it came to administering a large empire) but he was, like all of the Yuan emperors, still a Mongol. He was not weak, not pliant and would not allow others to flout his authority or work against the vision that he had for the Mongol Empire. Confucian scholars came to him for protection, which he extended, and he stood up against the persecution Temudur was bringing down on them.

Shidebala Khan showed great promise. He had strength of character, was very well educated (he could recite Tang dynasty poems from memory and was an accomplished calligrapher) and a devout Buddhist. When he stood up against Temudur and showed that he was his own man and would not be dominated by others, his exasperated grandmother, the Empress dowager Targi, lamented that, “We should never have reared this boy!” He replaced Temudur with a new chief minister named Baiju and though Temudur later tried to return to court and humble himself, the Great Khan would not have him back and he died embittered around 1322, in roughly the same period as his patron the dowager empress.

As emperor, Shidebala began enacting many reforms to try to bring under control the political and economic chaos that had been growing for a very long time, much of it due to the lack of a consistent policy on the part of the dynasty. He showed favor to the Confucian scholars and to the Buddhist lamas but took a rather dim view of Islam and there was some persecution of Muslims. This antagonism, however, should not be too surprising considering that there are probably no two religions that stand in starker contrast than Buddhism and Islam. The renewed emphasis on Confucianism also led to a somewhat more restrictive role for women than was traditionally the case in Mongol society.

However, what was most important was the efforts by Shidebala to bring about economic reform and stamp out corruption. Patronage had run rampant in the empire and efforts to stop this in particular had the effect of making Shidebala very unpopular with many Mongol princes. His dismissal of Temudur and his appointment of Chinese officials also caused bitter feelings among many who felt the new Khan was taking their empire in a non-Mongolian direction. Five princes colluded with the supporters of the late Temudur to launch the “Nanpo Coup” on September 4, 1323. The Emperor and Baiju had stopped at Nanpo on their way from Xanadu to Peking and it was there that the conspirators struck and assassinated them both. The next Khan would take a much more Mongol purist style as ruler though even he (Yesun Temur) was outraged by the murder.

Shidebala had shown great promise and one cannot help but speculate about what would have happened had he lived out his reign. Might the Yuan Empire have been put or a more solid setting that might have allowed it to endure longer? In any event, as it happened, the “tradition” continued as the pendulum swung back in the opposite direction. As a result of this, Shidebala has the unique position of being one of the few non-Chinese rulers of China that Chinese history tends to speak favorably of. Considering how they were treated by him and his father compared to their predecessor and successor it is no wonder that Shidebala Khan, or Emperor Yingzong as they would have called him, in one of the most highly regarded of the Mongol emperors by the Chinese even today.
Posted by MadMonarchist at 12:19 AM