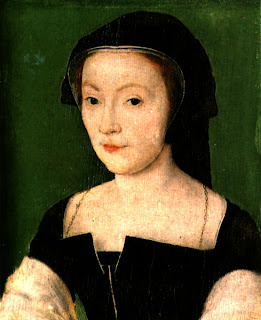 One of my favorite female royal figures from history, and one that does not get very much attention, is Marie d’Guise, Queen-regent of Scotland. The problems she had to deal with were immense and far-reaching, reliable support for her was scarce and fragile and many probably did not expect much from her in terms of success. Yet, she ruled during a period when, whether good or bad, strong royal women in national leadership was fairly common considering this time also saw Queen Mary I and Queen Elizabeth I in England and the formidable Queen Catherine in France. In fact, Marie d’Guise is one of the most important but often overlooked figures of the Tudor era in British history. She was born in 1515 to Claude Duc d’Guise and Antoinette de Bourbon-Vendome and was first married to Louis d’Orleans, Duc d’Longueville in 1533. King Henry VIII of England famously considered asking for her hand but Marie declined on the grounds that she had not a head to spare. Sadly, less than five years after her marriage she was a widow and in 1538 married the Stuart monarch, James V King of Scots (r.1513-42). France and Scotland had (and would be) old allies against the common threat of England, but the rise of Marie d’Guise as Queen consort of Scotland took things to a new level.

Despite his rather “colorful” private life, King James V and Queen Marie d’Guise both endeavored to due their royal duty but the royal couple’s only child, the famous Mary Queen of Scots, was born only a few days before the death of King James V. Queen Marie d’Guise was immediately faced with a crisis when King Henry VIII of England (always looking for ways to increase his power, at home, in France or northward) tried to take advantage of the situation and conquer Scotland, but was unsuccessful. No doubt he was also a bit disappointed that a previous English victory over the Scots had been won while he was away with his wife Catherine of Aragon acting as regent during the Scottish invasion. So, suffice it to say, there was danger and crisis from the beginning when Marie d’Guise was left alone in Scotland following the death of her husband. The child Mary Queen of Scots was spoken for by James, Earl of Arran (a Protestant pro-England Scot who later became a Catholic pro-French one and thus not entirely trusted by all) until 1554 when Marie d’Guise deposed him and became regent of the Kingdom of Scotland herself.

Queen Marie d’Guise faced a difficult situation. Come from the family that was well known as the leaders of the Catholic faction in France, she was a devout daughter of the Church of Rome which made her unpopular with many of the Scottish nobles who were adherents to the new, more austere, Protestantism of John Knox. However, Marie d’Guise was tolerant toward the Protestants and ruled in such an open manner that she made friends out of many who would have been her enemies. In fact, any claim that the Queen was intolerant is easily disproven by the fact that the Protestants even backed her decision to marry their young Queen to the Dauphin of France, Francois II. The Prince of Wales had been an earlier candidate and it proved extremely difficult to keep religion out of politics when England supported the Protestants and France supported the Catholics. Thus, Scotland easily could and often did become a battleground for the two more powerful nations to the south.

The Queen wanted to avoid this, knowing that the fragile coalition she had built between the Catholics and Protestants could be easily shattered. Nonetheless, problems soon arose with England. English support for the Scottish Protestants had dried up when the Catholic Queen Mary I was on the throne in London, but that changed with the accession of her Protestant sister, who soon began sending support to the Protestants in Scotland. Although Queen Elizabeth I had signed a peace treaty with Marie d’Guise, she sought to arouse the Protestants against their regent as a way to remove French influence in Scotland. Civil war broke out anew and Queen Marie d’Guise showed no hesitation in crushing the rebellion. Indeed, her forces had all but destroyed the Protestant rebels when the timely arrival of the English fleet staved off disaster. Marie d’Guise was forced to call in French troops and England forged an alliance with the Protestant Scottish nobles and supported them with an English army sent to invade Scotland. Fortunately for her, Queen Marie d’Guise defeated the English in a stunning victory at Leith. However, the resulting crackdown against the Protestants only widened the civil war.

In time, the Queen-regent was driven from power, but was later able to return. France and England continued to support the opposing sides but the Queen managed to hold the government together by sheer determination; the determination that she did not want her daughter to endure the same problems she had been forced to deal with. Her work was far from complete when Queen Marie d’Guise died of dropsy on June 11, 1560. However, even as her health failed her, she had continued to lead. While on her deathbed she gathered the Scottish nobles around her and pleaded with them to come to an agreement and restore the peace that had existed between the two groups at the beginning of her regency. Sadly, she died before the conference came to a conclusion and the divisions would outlive her. Her daughter, Mary Queen of Scots, was summoned from France and would continue to rule according to the dictates of her faith and sense of duty but, like her mother, would also be plagued by religious attacks, the conflicting interests of France and England until she too was driven from the country and eventually executed by Queen Elizabeth I.
Posted by MadMonarchist at 2:40 AM