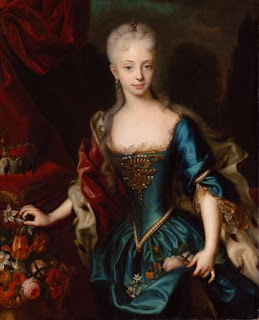 One of my favorite royal figures, and a reigning monarch in all but name, was the Holy Roman Empress Maria Theresa of Austria. During a time when Europe seemed overrun with rulers so taken by the ideas of the “Enlightenment”, who delighted in attacking organized religion, lived lives of sin and debasement and who accepted eagerly every new liberal trend that came along, God provided at least one monarch who set an example for all people in the person of Archduchess Marie Theresia von Habsburg. Born on May 13, 1717, she was the daughter of the Holy Roman Emperor Charles VI, who had hoped for a son but was never given one. Desperate to secure the succession for his daughter, he spent vast sums of money influencing the crowned heads of Europe to agree to the “Pragmatic Sanction” which they did, promising to recognize Maria Theresa as heiress to the Hapsburg empire and to respect her rights and territory. Sadly, this agreement did not have the effect that the Kaiser hoped and his fortune would probably have been better spent beefing up the Austrian army instead of trusting in the goodwill of his neighbors as Prince Eugene of Savoy had advised him.

In 1740 Emperor Charles VI died, leaving behind a daughter he had never really prepared for the role of Empress and a state that was almost bankrupt. Given the character of the new wave of liberal “enlightened despots”, it is perhaps not surprising that the Emperor was hardly cold in the ground before King Frederick the Great of Prussia broke his word and marched 30,000 men into Silesia. To oppose him, the greatest soldier in Europe, was the 23-year-old Empress Maria Theresa, pious and inexperienced, who could have hardly seemed like a very imposing figure to the famous old warrior. Furthermore, the British were pushing the new Empress to give in to Prussian demands for territory and the French were backing Karl Albrecht, Graf von Bayern (Bavaria) as a claimant to the Austrian throne. 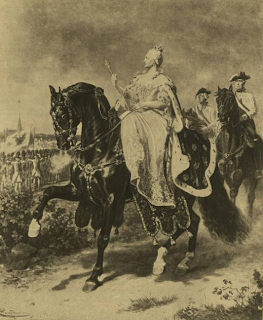 Against all of these enemies, and with her own court lacking in faith in the young woman and urging her to submit to Frederick, Maria Theresa held her ground and turned for support to the Hungarians. In a show of chivalry that should inspire pride in every Magyar heart, the Hungarians defied the odds and rushed to her side with enthusiastic loyalty. Heartened by the support of the fierce and faithful Hungarians, the Empress wrote to the ambassador of Great Britain, “Not only for political reasons, but from conscience and honor, I will not consent to part with much in Silesia. No sooner is one enemy satisfied than another starts up; another, and then another must be appeased, and all at my expense.” If the nations of Europe were determined to take advantage of Maria Theresa, they would certainly have a fight on their hands. During the War of Austrian Succession the Empress gained the grudging respect and recognition of the rest of Europe. Austria became a great power and Maria Theresa’s husband, Franz Stefan von Lothringen (or Francis Stephen of Lorraine) was elected Holy Roman Emperor though Maria Theresa continued to rule as she was simply far more suited to the task than her husband, to whom, nonetheless, she was lovingly devoted.

As Empress consort, Maria Theresa certainly succeeded in securing the succession of the Hapsburg throne, having 16 children, 9 of whom lived to adulthood. She also set an example of moral and devout Catholic leadership when most of the rest of Europe had fallen prey to ideas of nationalistic tyranny, influenced by the “Enlightenment”. Maria Theresa also cared deeply for her people and would visit them in disguise to learn the true state of affairs in her realm and hear the honest opinion of her people. She greatly improved the lives of her people and the economy of Austria by cutting taxes for the poor and, for the first time in Austrian history, taxing the nobility. She built up a strong and efficient military so that Austria would not be caught at a disadvantage again, she improved the justice system, gave the poor the opportunity for an education and allowed peasants to own their own land rather than constantly being at the mercy of the landed aristocracy. She also provided a refuge for the Jesuits when her son, Emperor Joseph II, and even the Church turned against them. 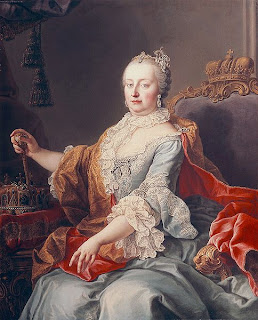 In the Seven Years War (known as the French & Indian War in America) she took Austria in on the side of France and Russia against Portugal, Great Britain and Prussia. Silesia was retaken for a time but a change in leadership in Russia saved Frederick the Great from defeat. Empress Maria Theresa was greatly distressed by the huge losses for France, particularly their eclipse by Britain in North America but Austria at least broke even in the conflict. The military campaigns Maria Theresa undertook were not always unqualified successes but she certainly surprised everyone by her determination and under weaker leadership the Hapsburgs would have certainly lost a great deal more. So courageous and strong-willed was the Austrian empress that she once said, in all honesty, that had she not been constantly pregnant (16 children remember!) she would have taken to the battlefield herself and led her forces in person, which would certainly have been a sight to see. She was a formidable woman in every way.

Aside from going along with Prussia and Russia in the unfortunate partition of Poland, which she did against her better judgment, Empress Maria Theresa stands in sharp contrast to other rulers of her time for her courage, piety and true concern for the welfare of her people. While other “enlightened” government officials in foreign lands ruled with an iron fist, Maria Theresa earned the loyalty of her people through her benevolent policies and by improving their lives. Likewise, while others (we will mention no names) were living lifestyles marked by scandal, murder and debauchery, Maria Theresa set an example of Christian virtue and as a loyal daughter of the Church. All of these rulers, whether Frederick the Great or Catherine the Great, had their own personal talents which cannot be ignored, but Maria Theresa sets an example as one who was able to rule with wisdom and compassion, being both a clever monarch and an example of morality for her people, which is truly the mark of a great leader.
Posted by MadMonarchist at 5:26 AM