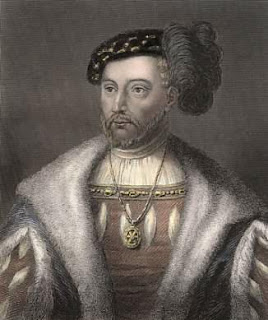 James V, King of Scots, is one of those monarchs who clearly knew right from wrong, tried to follow the right path as king and yet had a major problem when it came to denying himself. In the Tudor period he was the Catholic champion of Scotland who steadfastly refused to follow the example of King Henry VIII of England. Yet, like Henry VIII, he had a real weakness when it came to women, however, in the case of James V this was his only real weakness and in every other way he was an astute monarch, devoted Catholic and loyal son of the Church who did his best in extremely difficult circumstances. He was born in April of 1512 (the exact date is still debated) at Linlithgow Palace in West Lothian and was little more than a year old when his father, King James IV, was killed at the battle of Flodden on September 9, 1513. The infant monarch was then crowned King of Scots in the royal chapel of Stirling Castle on September 21, 1513 initially with his mother, Margaret Tudor (sister of King Henry VIII of England) as his regent. This lasted only until the next year though when Queen Margaret remarried after which the regency passed to John Stewart, Duke of Albany. John himself was second in line for the throne after Prince Alexander, Duke of Ross, the younger brother of James V, who was born after the death of their father.

In 1525 the Earl of Angus, who was stepfather to James V, took the young king prisoner and ruled Scotland on his authority until James escaped in 1528 and took power himself for the first time. It was also in 1525 that the Protestant doctrines first began to spread into Scotland and James V was determined to resist them. He had parliament pass an act forbidding the importation of Lutheran books and the following year James wrote a letter to Pope Clement VII in which he promised to use all the power at his disposal to combat the spread of Protestantism in Scotland. In 1528 James V had Patrick Hamilton, a commendatory abbot with connections at court, burned at the stake at St Andrews for preaching heresy. The Protestant leader John Knox credited this action with being the starting point of the Protestant Reformation in Scotland. However, in Scotland as in other areas, there were power hungry men who adopted the Protestant cause simply because they were interested in revolt rather than reformation. Had they only been concerned with reforming the Church they would have found a useful ally in King James V who was himself devoted to reforming the clerical abuses that existed in his country. To deny the problem was no longer possible as the Catholic Church in Scotland had, by that point, become rather infamous across Europe for corruption and immorality.

In political matters James took immediate action against the Earl of Angus who had imprisoned him as well as cracking down on rebel factions along the border and troublesome chieftains in the Western Isles. He improved the financial situation of the monarchy by keeping a closer watch on the royal estates and by taking advantage of his traditional feudal rights over the nobles. James V spent much of this money on building projects at Stirling, Falkland, Holyrood and Linlithgow. On January 1, 1537 he renewed the alliance with France by marrying Madeleine of Valois, daughter of King Francis I. However, Madeleine died only a few months after being married and so as to maintain the political situation James marred Marie of Guise on June 12, 1538. Marie of Guise was a devout Catholic woman, the daughter of Duke Claude of Guise (the Guise family were the leaders of the Catholic League in France) and she was the widow of Louis of Orleans, Duke of Longueville by whom she already had two children. Together James and Marie had two sons, the Duke of Rothesay and the Duke of Albany, in 1541 and 1542 but neither of them survived. In 1542 the couple gave birth to a daughter, Princess Mary, on whose shoulders the future of Scotland and the Stuart dynasty would one day rest. However, showing his major weakness, James fathered at least nine illegitimate children (3 before he was even 20 years old) of whom James, Earl of Moray would prove the most troublesome in the future for his legitimate heir.

Probably the most pressing issue for James V was the overflow into Scotland of the religious divisions his uncle King Henry VIII introduced to England by breaking with Rome and establishing his own Protestant church. Just as this divided the English into Catholic and Protestant camps, so too would Scotland be likewise. King Henry tried to persuade his Scottish nephew to follow his example and break from Rome as well but the staunchly Catholic James V refused to do so. Scotland became divided between those who favored the position of Henry VIII of England and those who were loyal to the Church and King James. The, essentially, Protestant camp included most of the nobles, the English Queen mother and religious dissidents. The Catholic camp included some powerful nobles, most of the clergy and the vast majority of the common people who were loyal to their King and the old religion. One of his most faithful servants was James Beaton who was made a cardinal in 1538 and shortly thereafter Primate of Scotland. It is a mark of his quality that Henry VIII of England considered him his greatest nemesis north of the border. The King of England was further enraged when the pope transferred to the King of Scots the title, Fidei Defensor, which Pope Leo X had originally awarded to Henry VIII for his refutation of Luther.

Matters came to a head after the death of the English queen mother in 1541 after which war soon broke out between England and Scotland. King Henry VIII, angry that King James V had rejected his offer, ordered an invasion of Scotland and this raid forced James to order his own forces to assemble for war. At first things seemed to go very well when, on August 24, 1542, Lord George Gordon, Earl of Huntly, soundly defeated the English army of Robert Bowes at the battle of Haddon Rig. However, Scottish hopes were soon dashed when the Scots were defeated at the confused battle of Solway Moss on November 24, much of it caused by the breakdown of the Scottish command after the death of Lord Robert Maxwell, before the battle, which caused the remaining Scottish leaders to start feuding amongst themselves for command. There were relatively few losses but many Scots were captured and the battle was a humiliation since they had the English considerably outnumbered. King James V was not present on the battlefield but was then at Lochmaben. He reportedly fell into a feverish despair when news of the defeat reached him and he withdrew to Falkland Palace in a state of nervous collapse.

James V took to his deathbed and was there when his only living heir, a daughter, was born on December 8. That girl would soon become the famous but tragic Mary Queen of Scots. King James V was alleged to have said on his deathbed when word of the birth came that, "It began with a lass and it will end with a lass". This was a reference to the origins of the Stuart dynasty with the daughter of Robert the Bruce and would prove to be true as the last reigning monarch of the House of Stuart would be Queen Anne; a lass. King James V died on December 14 and was immediately succeeded by his daughter, Mary Queen of Scots, and he was buried at Holyrood Abbey alongside his first wife Queen Madeleine and his sons by his second wife Queen Marie of Guise who would soon be ruling as regent on behalf of her daughter. In many ways his reign had been the last gasp of Catholic Scotland. The country would never be quite the same again, neither was independent Scotland ever to be quite the same as it had been under King James V. It would for some time be a rather unequal partner with England, for some time be held under the boot of England and then finally restored to her full rights, but all in all things would never be quite the same as it had been before. It was only left to Queen Mary to carry the cause of Catholic Scotland to its tragic end.
Posted by MadMonarchist at 12:42 AM