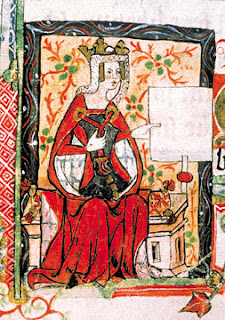 Most people remember Mary Tudor as the first Queen regnant of England, and officially this is so. However, long before there was a Tudor dynasty there was another woman who tried to be or who should have been the reigning Queen of England. Her story begins with that of her father King Henry I of the Norman line. Henry was not an oppressive king but he was certainly less than successful at the royal duty of securing the succession. He had eight or more mistresses by whom he fathered around twenty five illegitimate children but of legitimate offspring who could succeed him he only managed to produce one boy and one girl: Prince William and Princess Matilda. This left little room for tragedy and in 1120 tragedy occurred when Prince William drowned in the Channel. This left King Henry with only his daughter Matilda to succeed him.

Matilda, who had been married to the Holy Roman Emperor Henry V of Germany, was made heiress and the King ordered the powerful barons of England to swear before God their allegiance to her as his successor on four different occasions hoping to ensure a peaceful succession. However, the nobility of England did not take an oath before God, even four of them, as seriously as Henry hoped and once he died, in 1135, there was to be trouble indeed. The barons were also rather hypocritical. They claimed that a woman was not capable of ruling a country but the fact of the matter was that Matilda was only too capable of ruling her country and the barons as well and they knew she would have been more than a match for them.

Empress Matilda (or Maud as she was often called in England) was now Queen though she only ever styled herself Lady of the English. She was a strong woman, bright, well educated, very independent and perfectly familiar with the politics of her day. She had in fact ruled as regent in Germany during the absence of her husband the Emperor. The nobles knew that, like her father, she could never be dominated by them and so they decided to back as king someone they thought they could dominate: her cousin Stephen de Blois. Stephen, though, was no fool and he was not about to pass up the chance to be King of England. Going along with the crowd that disregarded the wishes of the late king and the oaths of allegiance, he set out for England at once and began securing the loyalty of the nobles, government officials and churchmen he needed to seize the throne. After only three weeks he had enough support, aided a great deal by his seizure of the Treasury, to crown himself King of England on December 22, 1135. 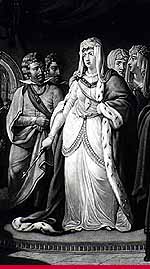 Matilda suffered the disadvantage of being in France as the battle for control of England was already breaking out but she spent her time wisely, gathering her military forces and the support of those barons in England who were loyal to the wishes of her father and accepted her as the legitimate Queen of England. In 1139 she left Normandy with her army to land in England and confront her cousin who had usurped her throne. When it came to blows both sides were about evenly matched. One castle would fall to one side and another castle to the other. Eventually a bloody stalemate ensued with neither side able to gain a clear advantage.

This situation was intolerable for both Stephen and Matilda as neither of them had the resources to prevail in what had become a war of attrition. The Church was deluged by refugees and some unscrupulous barons took advantage of the lack of a single government to pillage the countryside for their own benefit. Famine spread and disease, hunger and raids took a horrible toll on the public. Things began turn in the direction of the Lady of the English though in 1141. Her forces defeated Stephen in April and took the would be king prisoner. For a short time she was in control of the country and held power unopposed, but it was not to last given how much the state of the country had already deteriorated. The situation became so bad that when Matilda decided to have her own coronation in June the funds could scarcely be found. Stephen escaped from his captivity and a rebellious mob stormed her pre-coronation banquet at Westminster, forcing Matilda to flee London. By the end of the following year it was Matilda who was stuck; besieged at OxfordCastle by the forces of King Stephen. She had to escape with four of her knights draped in white robes to blend in with the surrounding snow. Such a harrowing event was not uncommon for the Empress as she had earlier escaped the clutches of her enemy disguised as a corpse! 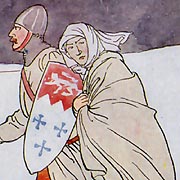 Everything seemed to be going wrong for the Queen Empress and in 1148 she was finally forced to leave England and return to Normandy. The fight had begun to seem completely hopeless and she was devastated by the loss of Robert of Gloucester, her half brother and most ardent supporter. It seemed that Stephen had won, which he had, but Matilda would continue to be a force in English politics for some time to come. When Henry Plantagenet, the son of Matilda and her second husband Geoffrey V of Anjou, grew up he became quite a thorn in the side to King Stephen. Tragedy then struck the King of England when his wife died in 1152 and his son and heir died a year later. The grief stricken Stephen made a deal with Matilda that her son would succeed him on the English throne. Less than a year later Stephen died and the young Plantagenet became King Henry II of England, destined to rule over the greatest extent of English power in Western Europe. And, through it all, Matilda was there acting as Queen Mother and trying to keep the peace between her sons and later Henry II and St Thomas a Becket. She died in 1167, never recognized as Queen of England, but the first woman nonetheless to hold power over the country and prove that, popular or not, she had what it takes to rule a country.
Posted by MadMonarchist at 12:18 AM