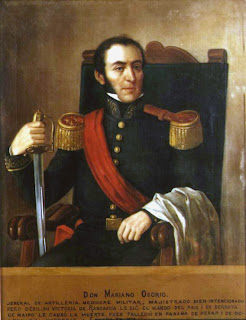 One of the leading royalists in South America, particularly Chile, was General Mariano Osorio. He was born in the city of Seville, Spain in 1777 and, like many of his generation, joined the army and saw his first combat in the Peninsular War against the forces of Napoleonic France in 1808. He made something of a name for himself on the field of battle against the French occupying forces. In 1810 he was appointed head of armaments production in Catalonia before being posted to the colonial army in Peru, Peru being something of a royalist stronghold in South America where revolution was stirring. A brilliant mind, he served as professor of mathematics at the local Spanish military academy when he was not on the battlefield as general of artillery.

After moving to Peru, General Osorio settled down and gained a major personal and social victory when he married the daughter of the Viceroy of Peru, Joaquin de la Pezuela, Joaquina de la Pezuela. Soon, he was thrust into battle against the revolutionary forces determined to dismantle the Spanish empire in America. When republican forces attempted to seize control of Chile, General Osorio was sent in and led the royalists to victory at the Battle of Rancagua (known as the ‘Disaster of Rancagua’ in revolutionary circles) on October 2, 1814 against the Chilean rebel army under Bernardo O’Higgins and Jose Miguel Carrera. It was a great victory for the Spanish royalist forces and O’Higgins himself only narrowly escaped with his life. General Osorio had triumphed, despite having a rather reckless second-in-command, and a few days later the Spanish army marched unopposed into Santiago.

Chile was again under Crown control and this period is known in local history as “the recon quest”. General Mariano de Osorio was appointed Governor and Captain-General of Chile and he methodically set about restoring law and order, suppressing rebellion and meting out harsh justice to those who had committed treason against His Catholic Majesty. Courts of vindication, as they were called, were established and rebels were either hanged or exiled to the outlying islands. Those whose property had been seized or destroyed by the revolutionaries were given compensation. In 1815 formal royal courts were reestablished and, during his brief tenure, General Osorio also closed the National Institute and Library (where revolutionary sentiment was rife) and restricted trade as this too was often an avenue of subversion. These stern measures did restore peace, law and order but had a detrimental effect on the economy which impacted republican and royalist forces alike. However, Osorio had done his duty well, he had defeated the revolutionary army, restored Chile to the King of Spain and suppressed insurgent activity.

However, Don Mariano was not a harsh or cruel man and tried to be fair to all. He recommended a number of exiles to the King for clemency and always had as his goal the reestablishment of humane and moderate government. After two years of this political service, Mariano de Osorio returned to Lima, Peru and turned the governorship of Chile over to Francisco Marco del Pont. However, things did not go well in his absence. On February 12, 1817 the revolutionary Army of the Andes under the famed Jose de San Martin soundly defeated a Spanish royalist army under Rafael Maroto near Santiago (it helped that the rebels had about a 3-to-1 superiority in numbers) at the battle of Chacabuco. Once again, General Mariano de Osorio was looked to for leadership and he gathered a royalist army and marched back to Chile to restore the authority of the Crown once again.

On March 16, 1818 Osorio and his smaller royalist army launched a surprise attack on the combined rebel forces of Jose de San Martin and Bernardo O’Higgins at the Second Battle of Cancha Rayada. The battle was a stunning royalist victory. Having every advantage, the last thing the rebel forces expected was for Osorio to attack them and they were caught completely unprepared. O’Higgins was badly wounded and the Army of the Andes soon disintegrated into a panic-stricken flight from the field, O’Higgins and San Martin barely staying ahead of the pursuing royalists themselves, indeed rumors spread that they had been killed. The revolution had been knocked back again and morale was extremely low amongst the republican leadership of Chile and Argentina.

However, things were not ideal in the royalist camp either. General Osorio had suffered around 200 losses but more had been captured and even more had simply deserted so that, despite gaining a decisive victory, his already outnumbered force had been reduced by nearly half. San Martin had escaped and still held Santiago and was quickly rebuilding his army. This was done with such effectiveness that despite being routed at his last engagement he was able to field an army fully equal to that of the royalists at their next encounter. That meeting came at the Battle of Maipu on April 5, 1818 near Santiago. San Martin opened the battle with an attack and made good use of his cavalry knowing that the royalists were lacking in cavalry from their previous engagement. Despite hard fighting, the royalist flank was turned and the rebel horsemen overran their position. The battle was a complete victory for the revolutionaries and General Osorio was forced to abandon the field. Chile was lost to the Spanish Crown for good and with the decimation of the royalist army the way for Jose de San Martin was open to Peru.

Royalist control in Chile was reduced to Chiloe island and the city of Valdivia. General Osorio returned to Lima to report on how such a disaster had come about. After settling matters there and disheartened over the break-up of Spain’s empire in the Americas, he decided to return home. However, while sailing through the Caribbean the general became very ill and put in at Cuba. He was found to have malaria and died there in 1819. General Don Mariano de Osorio had won some great victories for his King and country in his career and should be remembered for that. He had restored Chile to the Spanish Crown once but had not been able to do it twice.
Posted by MadMonarchist at 12:54 AM