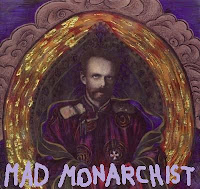 As regular readers may know, I am running behind due to the recent 3-part series, the royal wedding in Britain and my own absent-mindedness. Planned posts for last week will be posted this week in their turn. They will deal with royal figures from England, Mongolia, Spanish South America, Austria and a well known film from the 90's. Since things do pop up (news, anniversaries or the urge to rant) I will be a bit more guarded about promises as to exactly when things will be posted. However, on my list for the not-too-distant future will be the last King of Italy (I've been trying to cover more Italian topics in this year of the anniversary of the Kingdom of Italy), a swashbuckling Spanish-Austrian adventurer, a "great" Roman Pontiff, the controversial Queen Christina of Sweden and a more detailed look at the 'mascot' of The Mad Monarchist blog, the notorious Baron Ungern von Sternberg. There will be other items as well, still have some thinking to do on other topics but I hope everyone will find something to interest them. My thanks to you all for reading, stay strong, keep up the fight and keep spreading the 'madness'!
Posted by MadMonarchist at 7:45 PM