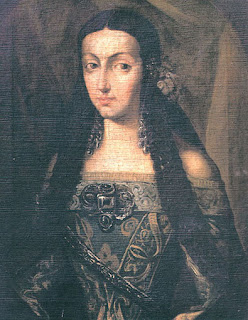 Most will have heard of the unfortunate Carlos II, the last Hapsburg King of Spain, but how many know about the woman behind the man, Queen Marie Louise of Orleans? As royal consorts go, she had impeccable ancestry. Her grandfathers were King Louis XIII of France and King Charles I of Great Britain and among her uncles were the “Sun King” Louis XIV, King Charles II and King James II of Great Britain. The Princess Royal of England, Princess consort of Orange and future Queen Mary II of Britain was her aunt. So, she had the blood of the Bourbon, Hapsburg and Stuart dynasties flowing in her veins. She was born Her Royal Highness Marie Louise d'Orléans, Mademoiselle d'Orléans, at the Royal Palace in Paris on March 26, 1662 to Philippe Duke of Orleans and Princess Henrietta Anne of England. As a child she was known for her beauty and winning personality and from the start she was her father’s favorite, a real “Daddy’s girl”.

Marie Louise had a good upbringing and was given a great deal of attention by her grandmothers; the tragic Queen Henriette Marie and the formidable and calculating Queen Anne of Austria who left most of her fortune to the child when she died in 1666. She did not have an entirely happy childhood as her mother died in 1670 but, on a brighter note, she had a very good relationship with the stepmother she acquired the following year and with whom she always remained close. As she grew older though, the family necessarily began looking for an appropriate marriage for her and, as was often the case, trying to maintain friendly Franco-Spanish relations were a priority as the two monarchies had recently been squabbling over conflicting claims in the Low Countries. As a result, to a large extent thanks to King Louis XIV of France, she was betrothed to the King of Spain at the age of 16. On August 30, 1679 she was married by proxy at Fontainebleau Palace with the Prince of Conti acting for the groom. In a touching moment, during her last days in France, she went to pray at the Val-de-Grâce convent where the heart of her late mother was preserved.

Marie Louise then set out for Spain and met her husband, King Carlos II, going through another wedding ceremony at Quintanapalla on November 19, 1679. The resulting marriage was sadly tragic though not for the reasons one might expect of a match arranged by the father and uncle of the bride. Not surprisingly, King Carlos II was absolutely smitten with his young bride the instant he met her and for the rest of his life no other woman ever held his heart the way she did. However, her status in France had given her comfort but great freedom and she found the strict protocol and rules of the Hapsburg court in Spain hard to endure. There was also a good deal of lingering animosity against the French due to the recent conflict and for many Spaniards their new French queen became the focus for it. As Queen, Marie Louise was spared the worst of this, but her ladies were constantly being accused of involvement in some sinister plot or intrigue on the part of France and this only served to increase the feelings of isolation and homesickness on the part of the queen. 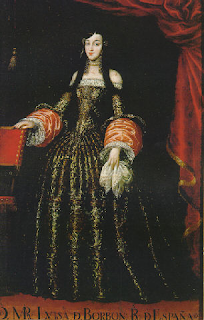 A family of her own might have been enough to pull her through but, alas, this was not forthcoming. King Carlos II (who may have been impotent) and Queen Marie Louise tried for years and prayed earnestly and constantly that God would give them children but none were forthcoming and eventually the Queen lost hope that any would. This, on top of everything else, caused her to fall into depression. There was no doubting the King’s love for his wife, but the coldness with which others treated her, the popular clamor against her and her lack of children worked together to remind her of how much happier she had been as a child in France, with no worries or responsibilities and surrounded by her doting father and attentive stepmother. The King, who certainly did not represent the best of his dynasty, could do little to help her as he was often ignored in his own government and was beset by problems on every side as economic problems increased, foreign losses mounted and Spanish power declined. Under such circumstances, the best of monarchs would have been hard-pressed and the generally disabled Carlos II could realistically never have hoped to.

Queen Marie Louise, who had arrived in Spain young, beautiful of full of energy had dealt with her depression by over eating and had become an overweight, unhealthy and constantly sad figure. She attended her husband, heard mass and tried to distract herself as best she could but she could find no happiness. On February 11, 1689 she was taken to bed with extreme stomach pains. Marie Louise had come to her tragic end, passing away the next night. However, her last thoughts were extremely touching. Despite all of his infirmities, her last words were of her husband, the one person in Spain who had always truly cared for her. “Your Majesty might have other wives”, she said, “but no one will ever love you as I do”. And with that, she departed this life at only 26-years old. King Carlos II would marry again, as duty dictated, but he would never hold any woman as dear as he had Marie Louise, and in his mind, no other could ever hope to match her and the heartbreak he felt would never go away. He lived on in increasing misery until 1700 when the reign of the Spanish Hapsburgs came to an end.
Posted by MadMonarchist at 12:27 AM