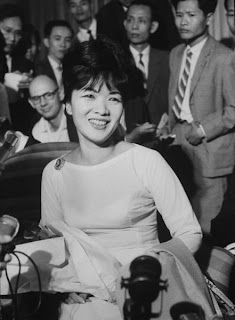 The always controversial Tran Le Xuan, better known as Madame Nhu, wife of Ngo Dinh Nhu, the un-official first lady of South Vietnam died on Easter Sunday in Rome at the age of 86. Having already posted on "The Dragon Lady", a great-granddaughter of Emperor Dong Khanh, I shall not re-tell her story. Although we would certainly be at odds on at least one topic, I always had rather a soft spot for Madame Nhu, a very tough lady who had a refreshingly blunt sort of honesty. It seems rather fitting that she died on Easter, given that she left Buddhism for Christianity and had all of the zeal of a convert, doing her best to uphold Catholic morality in the Republic of Vietnam. She was also an ardent anti-communist who wished that the Christian nations could show as much solidarity as the anti-Christian, atheistic ones did. Unfortunately, she will be mostly remembered, as she has been, in a very negative light, as the woman who said unkind things about monks burning themselves alive and the woman who managed to outlaw abortion, divorce and dance halls in Vietnam. She spent her long years of exile in France and Italy, mostly Italy, going out only to attend mass as she waited for the day she would be reunited with her husband. Like her or not, that day has come for Madame Nhu. I hope she rests in peace. MM
Posted by MadMonarchist at 3:53 PM