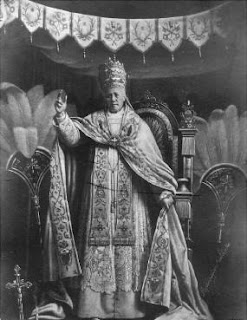 It is a mark of how well regarded Pope Pius X was that he was the first pontiff to be canonized by the Church since St Pius V in the XVI Century. Through his steadfast devotion to traditional, orthodox doctrine, his upstanding example of courage and personal holiness as well as his compassion and personal friendliness, St Pius X stands out to this day as the ideal picture of what any pontiff, bishop or priest should aspire to be in the eyes of Catholics around the world. He was fully committed and capable of carrying on the work of his predecessors Leo XIII and Blessed Pius IX, both in terms of Church teaching and in carrying on the struggle for the rights of the Church and the stand-off with the secular powers in Italy. His reign was a statement to the world that the Catholic Church would not cease to preach the true Faith and would not give in to the trends of society with which the world was enthralled. Because of this he has come to be remembered as perhaps the preeminent anti-modernist pope. 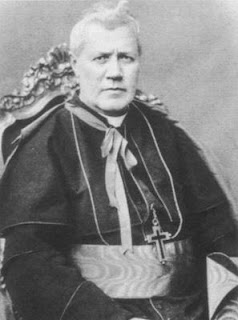 St Pius X was born Giuseppe Melchiorre Sarto on June 2, 1835, the son of a humble postman in Riese, Italy. He was ordained priest and served as Patriarch of Venice before being elected to the See of Peter on August 4, 1903. The motto for his pontificate was to, "restore all things in Christ". He was known as a deeply religious man, even among the clergy, and was known as such a conservative, even reactionary, that many considered him un-electable. This was true even of himself. When someone said to him, before the conclave, that he would not be elected he replied, "thanks be to God, as I bought a round-trip ticket!" When the votes were being tallied in his favor, he pleaded with the cardinals, "For the love of God, forget about me; I do not have the qualities to be pope" and when the results were given he replied of his victory, "I accept, as one accepts a cross".

Taking the name of Pius X, purposely associating himself with the firm principles of Pius IX, he would go on to prove that it is often the most reluctant candidates who make the best pontiffs. Throughout his pontificate, from start to finish, he reigned as a 'country priest', with honesty, fairness and strict obedience to the doctrines and traditions of the Church. Although he demanded the highest obedience to the Petrine Throne, he was himself a humble man for example, abolishing the custom of applauding the Pope in St Peter's saying that it was not, "fair to applaud the servant in the home of the Master". He, the third "Prisoner of the Vatican" also made it clear that he would not back down in claiming the rights of the Catholic Church in both the spiritual and temporal spheres. He opposed the formation of "Christian Democrat" parties and called liberal Catholics, "wolves in sheep's clothing". He was quick to condemn the breaks between Church and state wherever they occurred, though he did urge Italian Catholics to make use of their vote to help avoid an electoral victory for the socialists. He condemned the rising trend of 'Modernism' and stressed the perfection of Sacred Scripture. When it came to the Bible, St Pius X did not go for a great deal of "interpretation". For him, what it said was what it meant.

However, it would be a mistake to think that St Pius X was all about stagnation. In fact he instituted many changes in the Curia, canon law and reformed the seminaries. He drove forward a revision of Church music based on Gregorian chant. He also heavily stressed the need for frequent communion, calling it the best way to get to Heaven. He was also a Pope for the laity, calling on them to become involved in the Church and in society to promote a Christian agenda of justice in society and compassionate welfare. He was able to accomplish his goals of a better educated clergy, a more involved laity and an end to any remnants of manipulation by the secular powers over the papacy. He also declared private property rights to be inviolable and set an example of loyalty to Truth, even when it is unpopular. When instructing a group of priests in Venice he told them, if they followed Church doctrine, "You will be called papists, clerics, retrogrades, intransigents. Be proud of it!"

When World War I began in 1914 the Pope was devastated. When asked to bless the troops about to march off to war he replied that he would "only bless peace". His great sorrow over this catastrophe hastened his death on August 20, 1914 after reigning for 11 years and 16 days. He was canonized by Pope Pius XII on May 29, 1954.
Posted by MadMonarchist at 8:13 AM