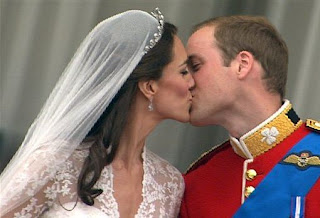 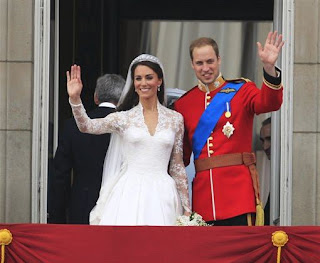 Quite an eventful night it has been (and I'm very tired at the moment). What can I say, nobody does it quite like the Brits when it comes to royal pomp and ceremony (come to think of it, no one really makes an effort besides the Brits these days). I thought it was spectacular, my only complaint was with the media coverage which (I'm hoping this was just an American thing) contained waaaay too much talk about Diana. Everyone looked at ease, in good humor but dignified. Prince William was very smart in his Irish Guards uniform (can't beat a British soldier in a red coat) and the bride, this is just my taste, I think takes the prize as far as her style and appearance etc. I think she really pulled off the traditional-modern fusion perfectly, just the picture of loveliness. Their new titles were also announced, henceforth they are Their Royal Highnesses the Duke and Duchess of Cambridge. Certainly a day to remember, and I certainly will, but right now I'm running on empty. God bless them both, I hope they have a very long and happy life together and Long Live the Duke and Duchess of Cambridge!
Posted by MadMonarchist at 8:26 AM