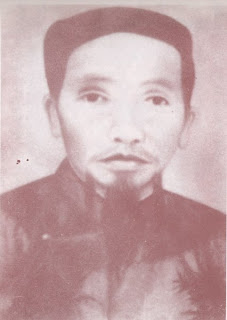 Tran Cao Van provides one of the most inspirational and heroic examples for all Vietnamese who valued their ancient traditions and monarchial system as well as wanting total independence and opposition to colonial rule, of a true and loyal hero who struggled all his life for the freedom of his country and gave his life in loyalty to Viet Nam and the Nguyen Emperor. He desired freedom for his country in the true sense, with Vietnamese culture and traditions free of foreign influence as well.

Tran Cao Van was born in Tu Phu village, in what is now Da Hoang Commune, Dien Ban district of the Province of Quang Nam in 1866. This was the same period that France first began the effort to colonize and bring their "mission to civilize" Viet Nam and the rest of Indo-China. Tran Cao Van was known to be a man of intelligence, integrity and absolute devotion to his country. He was saddened by the subjugation of the people, the manipulation of the Emperor and exploitation of the country whenever and wherever it occurred.

In 1885 the old imperial capital of Hue City was taken by the French and Tran Cao Van went to the mountains near Quang Nam where he joined the religious life at Co Lam Pagoda. He spent several years at the Pagoda to cultivate his spiritual life, a preparation for events in the future. In 1892 he left the monks and went to Binh Dinh to begin a career of teaching. He also began to plan and discuss the patriotic movement to drive out the French and restore the independence of Viet Nam. He wrote about the need for freedom and the sort of changes that would be needed in Viet Nam to preserve their independence and modernize the country, while also keeping in tact their ancient culture.

In 1908 Tran Cao Van was one of the leaders of the Anti-Tax revolt in Annam. France had forced the people to pay more and this combined with crop failures and a famine in the area to cause a situation where many were starving to death. Tran Cao Van became convinced that drastic measures would have to be taken to free the country. Tran Cao Van returned to Hue and began to advise the young monarch, Emperor Duy Tan. The Emperor also favored an immediate end to French rule and total independence for Viet Nam. It was 1916, France was in the middle of fighting World War I, and it seemed that the time could not be better. Tran Cao Van developed a detailed plan for a massive concerted uprising across the country. It was endorsed by the Emperor and on May 4, Tran Cao Van, Emperor Duy Tan, and the other patriots, left Hue to begin the uprising.

However, before the plan could be fully put into effect, the rebel leadership was betrayed and the group was arrested by the French authorities. The rebellion was stopped before it had a chance to get off the ground. Even the Emperor himself was arrested and charged with "treason". Another man of lesser virtue might have tried to save his own life, but Tran Cao Van did not. He refused to betray Emperor Duy Tan and confessed to the French in order to save the life of his young king. Tran Cao Van was taken to the guillotine still wishing long life to the Emperor. Along with the other loyal patriots, he was executed by the pro-French forces at Cong Chem, that is An Hoa, near Hue City, and buried in a common grave. Later, his body was removed and buried on Tu Hieu Holl, near the tomb of Emperor Tu Duc.

His life is an inspiration, a model of perfect courage, loyalty and patriotism. As he wrote before his execution, "Who is loyal? Who is righteous? Who enjoys life decorated with luxurious turban and belt, hammock and parasol? Leave me alone to die! The sky is still there! So is the earth and the dynasty! We wish long life to the Emperor!".
Posted by MadMonarchist at 10:28 AM