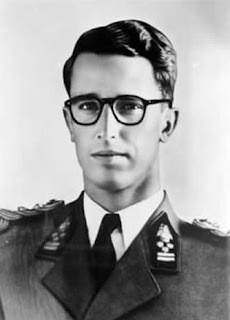 It is not a pressing subject, not much in the news and not even much talked about in most circles but it does come up just often enough to keep me from forgetting about it. I am speaking of the idea of a cause for the canonization of the late King Baudouin of the Belgians. Personally, and this will be no surprise to anyone, I would be totally in favor of such a campaign. King Baudouin was always known as a very devout man of faith and is said to have considered becoming a priest but, due to the situation regarding the unfortunate abdication of his father, King Leopold III, it was prevailed upon him that two abdications in a row could be the end of the Belgian monarchy and for the good of the country he remained a layman. The Church played a major part in everything he did and he was also associated with the charismatic renewal movement in the Church. However, I don’t think there is any doubt that what made King Baudouin stand out was his refusal to grant royal assent to a bill legalizing abortion in Belgium. Faced with a deadlock, government officials came up with the solution of basically deposing the King until they enacted the bill themselves and then placing him back on the throne.

Thus, it is not surprising that those I have found praying to King Baudouin already are those in the pro-life movement who see him as a great hero in the struggle against what Pope John Paul II called “the culture of death”. HH Pope John Paul II himself (whose cause for canonization is well underway) paid great tribute to the late King of the Belgians. In fact, King Baudouin was the last living member of the Supreme Order of Christ, the most rare and prestigious papal honor since the honor system was revised by Pope St Pius X in 1905. Pope John Paul II visited the tomb of King Baudouin, along with HM Queen Fabiola and four witnesses and later spoke in the highest terms of the late King of the Belgians as a man who put Christ at the center of his life and as a monarch who defended God and human rights, including the rights of the unborn. Some, of course, have said that such efforts did not really matter as the law was passed anyway and so, ultimately, King Baudouin accomplished nothing.

My easy response to that is; fine, but who did more? What more could he have done? The King could not change the hearts and minds of the politicians nor could he change popular opinion. The only thing he could do was sign the bill or not sign it and he did all that it was in his power to do: he refused to sign. What other monarch in Christendom did as much? He risked a great deal for his moral stand and that should not be shrugged off. It should also be kept in mind that it was not the King who found the legal “loophole” to enact the bill without royal assent. That was the politicians at work. However, even then, I look at someone like the celebrated English statesman St Thomas More. Does anyone say that the refusal of More to swear to the First Succession Act was meaningless because his refusal did not stop the act altogether? In fact, More openly looked desperately for any “loophole” at all that would allow him to obey his King and his God yet no one thinks less of More. How is it then that King Baudouin should be criticized for not being able to single-handedly turn the tide of liberal secularism in the western world?

Recently, on the anniversary of the death of King Baudouin, the subject of his possible cause for canonization was brought up. There seems to be no doubt that the issue is or has been looked into but HE Godfried Cardinal Danneels said that, as far as canonization goes, it was ‘not going to happen’. He went on to say that one does not have to be a saint to set an example for others and all of that stuff. However, a saint is simply someone who has gone to Heaven and, thankfully, it is not Cardinal Danneels (a man who has spoken against Catholic doctrine on occasion and covered up sexual abuse in his jurisdiction) who decides who does or does not get into Heaven. That is up to the King of kings and Lord of lords and no one else. For myself, I would be more confident of King Baudouin having a place in Heaven than I would the Cardinal (may God bless and keep His Eminence etc, etc). I believe King Baudouin is in Heaven and, in that regard, I consider him a saint already. Whether the Catholic Church chooses to recognize that or confirm it is, well, up to the Pope ultimately. However, if a more formal, concerted effort is launched for the cause of King Baudouin, I would certainly support it wholeheartedly and encourage others to do the same.
Posted by MadMonarchist at 9:07 AM