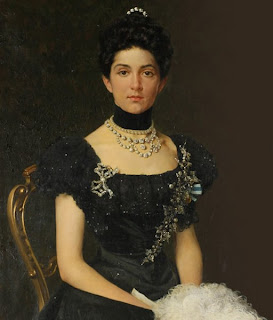 It might seem strange to some that virtually every King of Italy seems controversial in some way and yet virtually every Queen consort of Italy seems to have been widely beloved and respected. Such was certainly the case with Queen Elena of Montenegro, consort to King Victor Emanuel III of Italy. She was born Princess Jelena Petrovic-Njegos of Montenegro on January 8, 1873 to Prince Nicholas I of Montenegro and his wife the Princess Milena Vukotic, the fifth of nine children. With the rest of her siblings she was raised in the Serbian Orthodox Church and this caused some major problems when, as a young lady, she married the very Catholic Prince of Naples, heir to the Italian throne. In fact, her conversion to Catholicism had to be done on a boat in the sea between the two countries and her mother was so offended by her daughter becoming Catholic that she refused to attend the wedding. However, she gained quite a bit of attention when she arrived in Italy with her exotic background, striking features and (like most) standing quite a bit taller than her husband.

The couple had met in Venice where the Prince of Montenegro mentioned that the Prince of Naples was looking for a wife, however it was in Russia that the paths of the two later crossed and where it had first been thought that the princess might have found an Orthodox husband. In 1888 the Tsarevich invited her to a ball at St Petersburg and some began to whisper that it might have been her rather than Alix of Hesse who would one day become Tsarina. However, at the ball she was rather too popular on the dance floor and sparked a fight that led to a duel between Prince Arsen of Serbia and Baron Carl Gustav von Mannerheim of Finland (who was wounded). This left a rather bad impression on the Russian court, nonetheless it was at the later coronation of Tsar Nicholas II that she met the Prince of Naples and the two were immediately love struck. The formidable Queen Margherita was more concerned with the diversity of the royal bloodline (fearing too many cousins being married) and so warmly encouraged the match. 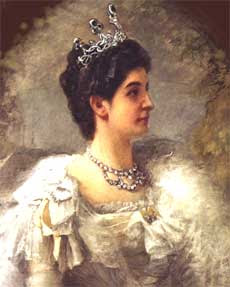 The two were married on October 24, 1896 and in 1900, after the assassination of King Umberto I, her husband became King Victor Emmanuel III and she became Queen consort of Italy. In 1901 she gave the King his first child, a daughter, followed by another in 1902, a son and heir in 1904 and two more daughters in 1907 and 1914. The King and Queen had a very happy marriage, the couple were very devoted to each other and the King would bring his wife roses from the garden every morning he collected himself. She was not totally without her detractors in Italy but she devoted herself to her new country, her people and her family. If there is one word to describe Queen Elena it is charitable. Almost her entire royal allowance, as soon as it was given, would be distributed by her amongst the poor. She was so generous in fact that the King could look quite stingy by comparison, something which was not lost on the Italian monarch. By nature a practical and frugal man he remarked once that if he were not so careful about his money the Queen would reduce them to poverty by giving it all away to the poor.

It was no empty gesture when she set an example for Italian wives in giving up her gold wedding rings to aid the war effort in Africa when the League of Nations had put a trade embargo on Italy. Of course, the Fascists had arranged the whole thing but, in time of war, country came first and Queen Elena led the other ladies of the Royal Family in being the first to sacrifice. After dropping her cherished rings into the urn, replacing them with iron “patriotic” rings, she said, “These rings, symbols of our first joys, symbols of our extreme renunciation now, make the purest offering to our country. With them we invoke before God victory for the young sons of Italy who defend rights which are sacred. We pray for the triumph of Roman civilization in Africa.” This was, for the Queen, national and not political and, unlike her mother-in-law who was suspected of fascist sympathies, Queen Elena stayed away from politics for the most part. Her only intervention of any significance was when she urged the King to press Mussolini for the creation of an independent Kingdom of Montenegro in 1941 as her homeland had previously been absorbed by Yugoslavia after World War I. The Queen also intervened, after the German takeover of former Italian areas, to obtain the release of Prince Michael of Montenegro from German captivity after he refused to collaborate with the Nazis. She was, alongside her husband, as a result of the war briefly Queen of Albania and Empress of Ethiopia but these titles were renounced in 1943.

Few other royals lost as much as the Italians in World War II and any efforts to smear their character by the political associations of the Italian government with Nazi Germany should always be taken alongside the fact that the King and Queen of Italy lost one of their daughters to Nazi persecution as Princess Mafalda was killed in 1944 in the concentration camp at Buchenwald. When everything came to an end for Italy regarding World War II and the fascist era, some allege that it was the Queen who convinced the King to flee Rome, causing some to accuse her of dooming the monarchy by that action. However, it would be hard to believe that she was solely responsible and, in any event, circumstances left very little choice with most of Italy in the hands of the Nazis and the fascist remnant that instantly became the implacably hostile to the Savoy monarchy. Ultimately, as we know, the Italian monarchy did not long survive the end of the war and Queen Elena was forced into exile alongside her husband. She died in Montpellier, France on November 28, 1952 at the age of 79.
Posted by MadMonarchist at 8:02 AM