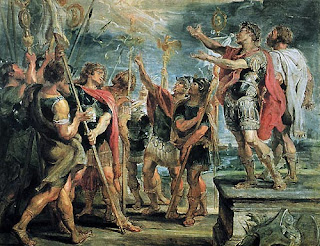 Finally, we have those people who try to frame the argument about “Christian republicanism” versus monarchy in such a way as to neutralize whatever scriptural evidence you can present. They will try to argue that all the verses concerning kings and monarchy do not matter because monarchy was the only game in town back then and the people in the Bible had no conception of what a republic was. They then assume that if they had, surely they would have all been ardent republicans. First of all, you know when this argument comes up that it is time to move in for the kill because they have run slap out of ideas. So, let us begin shall we…

In the first place, God knows everything and if God had desired a republic He would have commanded his prophets to establish one but, we know that didn’t happen, they established a monarchy. Secondly, certainly by the time of the New Testament, the people of Israel (with whom most of the Bible is primarily concerned) certainly would have at least heard of things like the democracies of Greece and the Roman Republic. In fact, by the time of the New Testament they would have been intimately familiar with the workings of the Roman Republic as they had by then become a client state of the Roman Republic and there was already a Jewish population in the city of Rome itself. However, it is true that the word “republic” never appears in the Bible. However, there are a number of passages which describe what republics or democracies are all about and none of them refer to these things in a favorable way.

Hosea 8:4, in a listing of transgressions, says, “They have set up kings but not by Me: they have made princes, and I knew it not: of their silver and their gold have they made them idols, that they may be cut off”. Think about what that means. Is it not at least somewhat descriptive of a republic? What is a president but a man “the people” (a majority or some powerful faction) has set up in the place of a king? I think it is also no coincidence that these condemnations of setting up rulers without considering God is put in the very same verse as a reference to idolatry. If a monarchy brings down the danger of pride upon one, a republic brings down the danger of pride on everyone. Rather than submit to God the people sometimes set up idols to worship and in the same way, rather than submit to the monarch God has provided (via the miracle of birth) people sometimes set up their own “king” (a president) to rule them according to their whims and fancies.

We also see it made clear throughout the Bible that democracy (which is the real or claimed basis of every republic -though they are not the same thing) is spoken of in a very negative way. Probably the best known passage of this kind is Matthew 7:13 which says, “Enter ye in at the narrow gate: for wide is the gate, and broad is the way that leadeth to destruction, and many there are who go in thereat”. Again, pause for a moment and consider that passage. Read the rest of the chapter to get some context, politics is certainly not the subject here, but it makes a very critical point that is made numerous times throughout the Bible. The majority will usually do what is wicked, what is easy and wrong while only a few will choose the hard path of righteousness. Although this passage is not about politics, it nonetheless makes a critical point about the very nature of democracy and the idea that the majority is always right.

However, as always, the weapon of last resort is the personal attack and republicans will say that the “nice” things said in the Bible about kings were all about King David, who was a very virtuous and upright man, but every other king in the Bible was terrible. Surely, they will try to reason, the commands to obey the king apply only to the good kings that God favored (David being the only one they can usually name). In the first place, not all kings of Israel were bad, neither were the most celebrated (David included) completely perfect yet this never had an impact on their position or right to rule. God made a covenant with King David, the only unconditional covenant God ever made in fact, which stated that the “divine right”, if you like, of the House of David to rule would never be taken away. In II Samuel 7:12-17 God, by the prophet Nathan, told David that his line would endure forever and that if his descendants were wicked, God would punish them but that he would never remove his favor from them as He did from Saul for the sake of King David.

It is also clear from scripture that the personal morality of a monarch has no bearing on the duties a subject has to be loyal to them. Surely everyone knows the famous passage, Mark 12:17, when Jesus was asked about paying tribute to the Roman Caesar, “And Jesus answering, said to them: Render therefore to Caesar the things that are Caesar’s, and to God the things that are God’s. And they marveled at him”. The fact of the matter is, when Jesus said that, the only Caesar in the world was the Emperor Tiberius who, by that time, had gone rather off the deep end and was living in paranoid debauchery on the island of Capri. Even at his best, Tiberius was a pagan and Jesus surely would not have approved of that, yet still the command was to be loyal and obey the law. Further, I Peter 2:17 states, “Honor all men. Love the brotherhood. Fear God and honor the Emperor”. This was, interestingly enough, written by St Peter during the reign of the Emperor Nero under whose persecution Peter himself was later martyred. Clearly, personal character has nothing to do with legal obligations so far as the Bible is concerned.

That is not to say, of course, that personal character did not matter but it is a clear indication of how far removed Christian principles are from endorsing republican revolution. Now, as we come to the end of this little series, consider the sheer amount of Biblical scripture we have covered (and I could list many, many more) dealing with the sacred nature of kingship and the commands to obedience of monarchs. When taken altogether we can see that many things today commonly held as fundamentally “Christian” actually have less Biblical support behind them than does the support for monarchy which also spans both the Old and the New Testaments. You can also read the entire Bible from Genesis to Revelations as many times as you wish and you will never find any endorsement of democracy, republicanism or indeed much of any good at all coming from the popular will of the majority. Whether it was the liberated Israelites howling for Moses to take them back to Egypt or the mob baying for the blood of Christ, when it comes to the Bible, the majority is usually wrong.

Perhaps the fundamental difference is that republics, even under the best of circumstances, are based on pride; the idea that “we” know what is best for us and that “we” will submit to no one higher than us or humble ourselves before anyone. Republican power is based on popularity at best or brute force at worst. Monarchial power, on the other hand, is based on the miracle of birth and the guiding hand of God. As God simply puts it in Proverbs 8:15, “By Me kings reign and princes decree justice”. Submission to the will of God or to selfish pride; those are, and always have been, the only two choices. Amen.
Posted by MadMonarchist at 12:18 AM