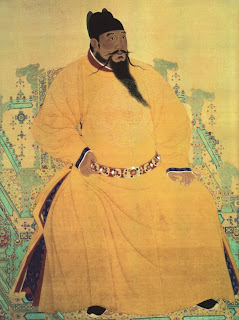 China reached one of the greatest peaks in her history during the reign of the formidable Ming emperor Yongle. Only the third emperor of the Ming dynasty, Yongle ruled during the time of traditional greatness in the cyclical history of Chinese dynasties. During his reign the Middle Kingdom would expand, explore and reach out as far as Africa, perhaps even the Americas if certain scholars are to be believed.
Born in 1360, Zhu Di, Prince of Yan, came to the Dragon Throne in 1403 when, as commander of the armies on the northern frontier, he marched on Nanjing, captured it and deposed his ineffective nephew Emperor Jianwen. He ascended the throne with the reigning name of Yongle or "Perpetual Happiness". He would prove to be one of the most effective rulers in Chinese history.
Having spent most of his life fighting the Mongols on the northern border, he was ruthless when dealing with his enemies. Upon coming to power all who opposed him were massacred along with all of their family, friends and associates. Yet, he was also a highly educated man, a skilled military commander and a clever statesman. One of his most significant acts was to move the capital of China north to Beijing.
Building on the successful reign of his father, Emperor Hongwu, Yongle established China as a prosperous agricultural empire. Plentiful crops allowed for a stronger and more active military and growing wealth allowed for the construction of a massive navy and diplomatic missions to countries all around China. As usual, the most constant threat to China was incursions by the Mongolians. Yongle proved his martial talent by personally commanding five victorious attacks against them. He then established a line of defensive outposts across Manchuria, Amur and Siberia. Korea agreed to become a tributary state of the Ming emperor and northern and central Vietnam was conquered by Chinese troops. He sent diplomats as far afield as Indonesia, Indochina, central Asia, the Middle East and even the court of Tamerlane.
Yongle also dispatched the largest and most famous naval expidition in Chinese history. The massive fleet was commanded by Admiral Zheng He, a Muslim eunuch from Yunnan, who journeyed across the Indian Ocean to the Red Sea, East Africa and according to some scholars, possibly even the Americas. Diplomatic ties were established, exotic animals were carried back as well as a number of kings to pay tribute to Emperor Yongle as their feudal lord. During this period of great learning and expansion, it was easy for the Chinese to believe that they were superior to all other nations. It also helped that Yongle encouraged scholarly studies along Confucian lines as well as Buddhist works. As is seen by the case of Zheng He, he also made extensive use of the eunuchs in high office as a way to counter the powerful mandarins.
Emperor Yongle died in 1424 after one of the most successful reigns in Chinese history. At the time of his death he was again marching against the Mongols. He was buried in Changling and had 16 concubines burned along with him. His is a name history can never forget, whether by holding off the Mongols, extending the Chinese borders, establishing the great city of Beijing or forging diplomatic ties with far-flung kingdoms all around the world. Although he was a hard man, ambitious, determined and ruthless at times, in every way a successful emperor is judged, Yongle more than fits the bill.
Posted by MadMonarchist at 8:32 AM