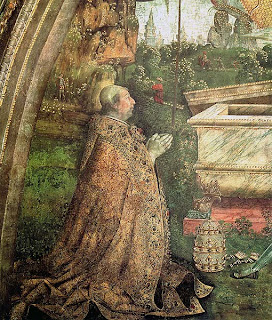 When one thinks of the Renaissance Papacy a very negative picture comes to mind for most; a picture of corruption, intrigue and immorality. Of course, there are a few like myself who thinks of the Renaissance Papacy in terms of great accomplishments, great monuments, great works of art and, as for the occasional unfortunate wickedness, we are all sinners after all. Again, however, that is not the majority point of view which is that the Renaissance Papacy was a shameful period in the history of the Catholic Church (which it was in many ways but it was also quite glorious in many ways as well) and no other pontiff is more famous or infamous for embodying the worst aspects of the period as His Holiness Pope Alexander VI. I take a somewhat less critical view of this notorious Borgia Bishop of Rome but there is no doubt and no denying the fact that there is still a great deal of room for criticism. He was not nearly so bad as most people think but he certainly was no saint either.

He was born Rodrigo de Borja y Borja on January 1, 1431 to a family from Játiva in Spain. He entered the Church and, as was sadly commonplace, he had an advantage in advancing up the clerical hierarchy due to some influential relatives. When he was 25 he was made a cardinal by his uncle Pope Callixtus III and later was appointed vice-chancellor of the Holy See. From the very start there was no shortage of corruption in his career, amassing bishoprics, granting favors in return for favors given and so on, which, was sadly not exactly unheard of at the time. However, he also gained an often overlooked reputation for diligence. He never shirked his duties, was a master of administration and tireless in his work, rarely missing a meeting in 35 years of service at the papal court. His talent is evidenced by the fact that even after the pope was someone other than his uncle his service was still appreciated and retained by successive pontiffs who could not fail to recognize his great abilities. Still, he was not working so hard with no reward in mind; he had his eye on the top job.

In 1492 he put all of his wealth and accumulated experience and highly placed contacts into doing all he could to secure his election to the Throne of Peter. With the aged Patriarch of Venice casting the deciding vote Cardinal Rodrigo de Borgia was elected Supreme Pontiff, taking the triumphal name of Alexander VI. The new pope was someone who understood the power of spectacle. Just prior to his election he had organized the first (and probably only) traditional Spanish bullfight in the city of Rome to celebrate the final victory of Ferdinand and Isabella over the Moors (and any fan of the bullfights cannot be all bad in my book). His papal coronation was no less lavish though as it occurred on August 26, the heat of the Roman summer caused the new pope in his numerous and heavy vestments to faint twice. To be sure, the Church faced numerous difficulties when he came to the throne but, lest anyone think that his election was entirely ill-gotten, keep in mind that his rather worldly reputation was well known but his talents as a diplomat and administrator were also well established and many genuinely considered him the best man for the job at the time, even if not the ideal candidate in terms of personal virtue.

Spain and France were rivals over Naples and the Turks were ‘large and in charge’ across most of the Mediterranean. There were also feuding cardinals within the Church as Italian family vendettas infected the Holy See. He set to work dealing with these issues in the fashion of an Italian prince more than a pontiff. He formed the League of St Mark with Venice, Milan and Rome; married one of his son into the Spanish royal family and another to the Neapolitan, tried to impress and win over the Turkish ambassador by a lavish welcome and ceremonial reception and he dealt with the one of the primary forces in the feud in the Sacred College by essentially buying off the della Rovere family. He also intervened in the discoveries of the New World and passages to the east by dividing unclaimed lands between Spain and Portugal to ensure peace between these two Catholic powers.

Of course, anyone not already familiar with Alexander VI might have been a bit confused by the mention of his sons. He had them. That was the biggest and most obvious sign of the moral failure of Pope Alexander VI. Throughout his life he had a total of six illegitimate sons and three illegitimate daughters by a number of mistresses. Though, if he should have any credit for it, he did finally settle on one mistress and remain ‘faithful’ to her. This was the one really major fault of Pope Alexander VI and he made no effort to cover anything up. At various times his children lived with him and he never made any effort to claim they were anything other than what they were. He arranged beneficial marriages for them, granted them high offices and so on just as a secular Italian prince and father would have done. Certainly his most notorious offspring was his son Cesare who was sufficiently ruthless to win the praises of Machiavelli. Perhaps the most unfortunate was Alexander’s daughter Lucrezia who was badly treated by her father and most of the men in her life and whose reputation has suffered simply by being the daughter of Alexander VI and sister of Cesare. However, such a reputation was quite undeserved as she was actually quite a kind, generous and pious woman.

Alexander VI won some diplomatic fights against the French over Naples and he had to deal with a renegade monk, Girolamo Savonarola, in Florence. After a very long ordeal that alleged visionary finally lost the popular support he once had and was put to death. However, one of the attacks he made against the pope that hit a soft spot was the fleshy worldliness of the pontificate of Alexander. There are a great many lurid tales about Alexander VI, each more shocking and pornographic than the last. Rest assured however that these are false without a shred of evidence to support them. For their origin one need look no farther than the political enemies made by the pope, rival families within the Church and nationalistic Italians who were not happy about having a Spanish rather than an Italian pontiff. Of course, these scandalous rumors were known to Alexander himself, but he took no notice, famously saying, in a rather libertarian sort of way, “Rome is a free city, where everyone can say or write whatever he pleases. They say much evil of me, but I don’t mind”. Still, the propaganda campaign waged by his enemies (often those previously defeated by the campaigns of Cesare de Borgia) took a terrible toll on the prestige of the papacy.

The worst tales of excess may be discounted but there is still plenty of material with which to justly criticize Alexander VI for. He totally disregarded his vow of chastity, was not above giving or taking bribes and used his offices throughout his career to enrich himself and his family. However, in the interest of fairness, it should also be remembered that Alexander VI never tried to change Church teaching to justify his own misbehavior. He upheld Catholic doctrine as was his duty even if he did not always practice it himself. After he declared 1500 a Holy Year he invented the custom of a special door being created to open at the start of festivities and to be closed at the end. The tradition of the ‘Holy Door’ in St Peter’s for such occasions is one still practiced to this day. The jubilee celebrations helped fund the campaigns of Cesare (as did the sale of offices and indulgences) but it also gave pilgrims a rather close look at how the leadership of the Church lived and as many as were impressed were also outraged. Not long after, Pope Alexander VI fell ill and died on August 18, 1503, whether from malaria or poison has never been concretely determined.
Posted by MadMonarchist at 1:06 AM