Soldier of Monarchy: Gordon of Khartoum 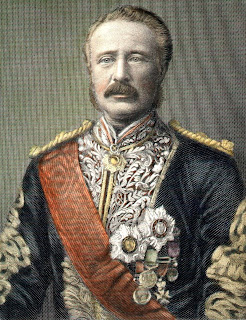 One of the most distinguished and colorful soldiers of the British Empire was Major General Charles George Gordon, also known as “Chinese Gordon”, Gordon Pasha or Gordon of Khartoum. During his eventful career he served Queen Victoria, the Khedive of Egypt and the Emperor of China. He was born in London on January 28, 1833 and after graduating from the Royal Military Academy at Woolwich he became an officer in the Royal Engineers. He first saw combat against the Russians at Sevastopol in the Crimean War. Afterwards he helped determine the new borders between Russia and the Ottoman Empire, getting his first taste of what would be a career noted for service in exotic locations. In 1860 he volunteered for service in China during the Second Opium War and later served with the British forces defending the foreign settlements during the Taiping Rebellion. When the Chinese governor of Jiangsu requested a British officer be given command of the assembled forces Gordon was selected for the job. 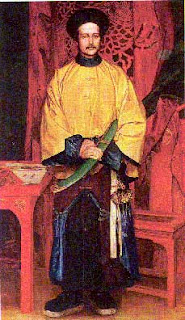 In 1863 Gordon was given command of the “Ever Victorious Army” and greatly distinguished himself by his victories over the Taipings, winning renown in his own country and with the Qing Imperial court. By the time it was all over the Qing Emperor had granted him high rank in the imperial army, a noble title and the right to wear a yellow jacket. The British, likewise, promoted him to lieutenant colonel and knighted him as a Commander of the Bath. Because of his successful campaigns against the Taiping rebels he was known thereafter as “Chinese Gordon”. After returning to England he carried out the normal duties of an officer of engineers, building fortifications along the Thames River. However, while in Constantinople on an errand for Britain he met the Prime Minister of Egypt who recruited him into the service of the Khedive. His own government approved and Gordon was made a colonel in the Egyptian army. Throughout the 1870’s he campaigned mostly in the Sudan, winning great local popularity, where he extended Egyptian control and decimated the still booming slave trade in the region. For his service he was named Governor-General of the Sudan.

Toward the end of the decade he showed great personal courage and diplomatic skill in putting down a local rebellion against Egyptian rule provoked by the slave traders whose business Gordon had made suffer so. Forces in Ethiopia were also interfering in this (the slave trade was still strong and influential in that country as well) and when Gordon traveled to Ethiopia to talk peace he was thrown in prison. Finally released, his health suffered as a result of this and the decade of strenuous work and campaigning he had done on behalf of the Sudan and he returned to Cairo to resign his position and went back to Europe to recuperate. By now his reputation was great and there were many jobs on offer to him. He met with Belgian King Leopold II to discuss taking up the post of Governor-General of the Congo Free State, the Cape Colony offered him their top military position and he was briefly aide to the Governor-General of India but his premature death cut that position short. During a trip to China he helped avert a war with Russia, served in North Africa with the Royal Engineers, was promoted to major general in 1882 and briefly served in southern Africa before returning to Europe. 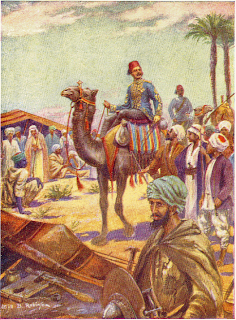 From 1882 to 1883 Gordon visited the Holy Land. Although he was often accused of being vain and having an enlarged ego, Gordon was also a very devout evangelical Christian. However, as was to be expected with Gordon, he attached himself to no established Church and had some rather unorthodox views about Christianity. Yet, his time of religious reflection was cut short by the outbreak of war in the Sudan where a fanatic claiming to be the Mahdi, “the expected one”, the Islamic messiah had launched a rebellion against the Egyptians and massacring all who opposed him or who denied his claims. One British-led Egyptian army was wiped out by the Mahdi and his tribesmen and the rebel vowed that he would conquer Cairo, Mecca, Baghdad and Constantinople. Desperate for someone to save the situation the Gladstone government turned to Gordon who was sent to the Sudan in 1884 to oversee the evacuation of the Egyptian and European population. However, being greatly attached to the Sudan, Gordon was unwilling to leave the people powerless at the hands of the Mahdi.

Gordon set to work at once, using all of his engineering brilliance to fortify the city of Khartoum which was soon besieged by the Mahdi and his army. Gordon sent requests for Turkish troops but was denied. He then asked for Indian Muslim soldiers from the British colonial army but was refused. Gladstone wanted no imperial adventures but Gordon was only concerned with saving the Sudan and defeating the Mahdi. When London ordered Gordon out of Khartoum he refused, knowing that it might take his death to force the British government to concern itself with the plight of the Sudanese and send an army capable of defeating the rebels. Gordon had only about 7,000 Egyptian troops in Khartoum, confronting upwards of 50,000 rebels, yet he held them off for some time through innovative engineering (building a canal that created a moat around the city) and military tactics such as the placing of improvised land mines. The British press picked up on his gallant stand and Queen Victoria herself wanted action taken to help Gordon. Unfortunately, the British expedition that was dispatched would arrive too late. 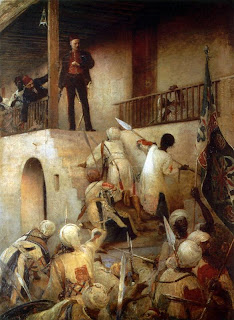 On the late night of January 25 and early morning hours of January 26 the rebel forces attacked Khartoum, overwhelming the defenders. The Mahdi had ordered Gordon to be taken alive but this command was not obeyed. In one of the most famous scenes of British imperial history rebel warriors stormed the Governor’s palace and the well-dressed Gordon Pasha boldly stepped out to face them. He was struck down by a spear, had his head cut off and stuck on a pike as a trophy for the Mahdi. Khartoum had fallen but Gordon had gone down like a lion. General Horatio Kitchener later defeated the rebel army. Gordon was mourned and celebrated as a heroic martyr of the British Empire, remembered for his military accomplishments and his humanitarian work. In Khartoum there still remains a small monument in his honor, bearing the words, “Charles George Gordon, Servant of Jesus Christ, Whose Labor Was Not in Vain with the Lord”.
Posted by MadMonarchist at 12:04 AM