The Islamic Republic Claims Another Victim

Last night it was reported in a number of papers and the cable news outlets that HIH Prince Alireza of Iran, younger son of the late Shah, second in line to the late Peacock Throne, took his own life at his home in Boston. He was 44 years old. An official release from the heir to the throne, HIH Crown Prince Reza Pahlavi, said:

“It is with immense grief that we would like to inform our compatriots of the passing away of Prince Alireza Pahlavi.
Like millions of young Iranians, he too was deeply disturbed by all the ills fallen upon his beloved homeland, as well as carrying the burden of losing a father and a sister in his young life.
Although he struggled for years to overcome his sorrow, he finally succumbed, and during the night of the 4th of January 2011, in his Boston residence, took his own life, plunging his family and friends into great sorrow.
Once again, we are joined with mothers, father and relatives of so many victims of these dark times for our country.” 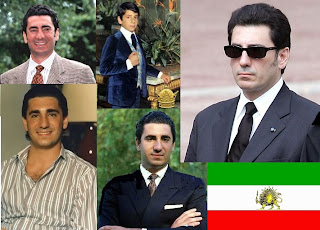 The sister spoken of was the very lovely and soft-hearted Princess Leila of Iran who likewise took her own life in a hotel room in London in 2001 at the age of 31. Prince Alireza studied at Harvard Divinity School, ancient Persian studies, as well as studying at Columbia. His death is another tragedy for an Imperial Family far too familiar with tragedy, their own personal suffering being a mirror of the suffering Iran itself and all of its people have endured since the Islamic Revolution. And there is no doubt in my mind that the republican regime is as guilty for the death of Prince Alireza if the Ayatollah himself had pulled the trigger. What ordinary person today can begin to understand the trauma that the Pahlavi family has endured at the hands of this criminal collection of terrorist fanatics? Torn from their people, chased from their homeland, forced to live in exile, forced to endure the endless vilification of their beloved father the Shah, not only by the republican regime but by its sympathizers and apologists in the west as well.
H.M. Shah Mohammad Reza Pahlavi died in Egypt in 1980, only one year after his overthrow by the revolution in 1979. That was a dark day for Iran and for the world at large, countries next door and on the other side of the world suffering as a result. The people have endured the most but there is no one family that has endured the unique suffering of the late Shah's family and the regime in power today is the author of all of their misfortunes. The Mad Monarchist sends heartfelt sympathy to the family and in particular to Her Majesty Empress Farah who has had the intense pain of out-living two of her own children. May they all come through this to now happiness again, reunited with their countrymen and may Prince Alireza rest in peace.
Posted by MadMonarchist at 12:53 AM