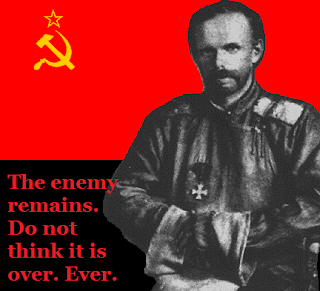 Yesterday the President of the United States and the President of the People’s Republic of China held a joint press conference at the White House. Much has been made of the leader of Beijing bandit-government claiming that he ‘could not hear’ the question put to him about the human rights abuses in China. Well, not to worry “comrade”, I am sure President Obama did not hear anything about the need to cut spending and lower the national debt either. This of course concerns the Red Chinese since they hold the biggest chunk of U.S. debt and are probably getting a little worried that they might not be getting their money back. Oh, isn’t the dog and pony show of republican politics fun? Obama talks about human rights and Hu Jintao acts like he cares while Hu talks about Red China being such a good friend of the U.S. and Obama acts like he believes him. What is more frightening is the possibility that Obama actually does. This is, after all, the first time America has ever rolled out the red carpet and given full state honors to communist dictator of the Chinese mainland. Take that all you people who think Obama is a communist! Wait…

I speak in jest of course because, as most know, China has been moving toward a more free economy in recent years while the U.S. (particularly recently) has been moving ever more rapidly in the socialist direction. When it comes to capitalism, I am under no illusions that it is a less than perfect system. I support it only as far as I am an ardent and absolute supporter of private property rights. However, it does not take the greatest powers of observation to see that efforts to impose economic egalitarianism do not work. Communism has been tried and in every case it has failed. Socialism has been tried and we need only look at the world around us, particularly in Europe, to see that it does not work. As things stand now, my biggest problem with capitalism is that it seems to be the only system which can make a nation wealthy enough to think they can afford socialism.

It simply goes against the laws of nature for anyone or anything to thrive in bondage. There should be no great surprise (and yet there is) that when you punish affluence and reward penury the result is a society with fewer wealthy people and more poor people. Why should a person work harder for a little extra money if they can get by just as comfortably doing nothing? Why should a person try to improve their financial situation if the only result is that they are put in a higher tax bracket and have their earnings taken from them? If you can keep more of your money in country or state A than you can in state B, who would not up and move to country or state A and leave B to reap the rewards of their own stupidity? Even those who harp the loudest about the need to punish the rich and help the poor see their actions part company with their words when it comes to themselves or their industry. That is why no one makes movies in Hollywood anymore but instead go to Canada or New Zealand -because making anything in California is far too expensive. Yet, even with such a punishing tax code California is still deep in debt and the North American equivalent of Greece at this point.

This is not a difficult concept to grasp. Socialism does not work! Even for those more moderate types who advocate it, they can only grasp at straws that have no real impact on the actual overall situation. We have seen this at least since the French Revolution when the agitators of treason stirred up hatred against the monarchy for claiming that Louis XVI and Marie Antoinette were living lives of idle luxury in the lavish surroundings of Versailles, indifferent to the suffering of the people. This, of course, was not true but given the predilection of humanity toward greed and envy it worked. Yet, cutting off the heads of the King and Queen and starving the poor little Dauphin to death did not fill the stomach of one peasant. It did not make so much as one penniless French worker a wealthy man. The forces of revolution have never, despite their claims, NEVER lifted up anyone. All they have ever done was to bring a greater share of misery to the entire population.

You can tax the rich into poverty (or tax them into relocating to Singapore) but that will not make the poor rich. Putting royals on bicycles will not enable anyone to afford a Mercedes and taxes and regulations that force aristocratic families to sell their ancestral estates will not give everyone their own manor house. It is as simple as this: trying to impose and enforce absolute equality is a losing game and always will be. The government, no government on earth, no constitution that has or will ever be written can make life “fair” or give anyone so much as one free lunch. The sooner everyone realizes this the better off everyone will be. We need practical solutions that recognize the truth of natural law and the human condition. We do not need political ideologues who think they can create a Utopia anywhere this side of the Kingdom of Heaven. We need to accept that the politician-class does not have all the answers, that independence and freedom are not the same things and that we are entitled absolutely to everything that is our own and nothing that is not. When that happens, the world will be better. Not perfect, but better. However, at current rates, by the time that change comes, I shall most likely be the late…Mad Monarchist.
Posted by MadMonarchist at 12:15 AM