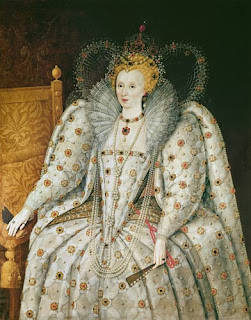 It was on this day in 1559 that Elizabeth I became "Queen of England, Ireland and France", thus starting the famous Elizabethan Era of English history, romanticized ever since as a golden age of English greatness. I say "romanticized" only because it was, and still is, not to take anything away from the great accomplishments of her reign. Very few English monarchs have had such a lasting impact on England and Great Britain as a whole than Queen Elizabeth I. To be sure, the odds against her were great in many ways. That she became queen at all is somewhat remarkable given the circumstances. At a time when a queen regnant was an extremely unusual thing, consider also that she was the younger daughter with a brother and an older sister before her, her father, King Henry VIII, had her mother be-headed and she was of such questionable birth that at one point her own father declared her illegitimate. Obviously this would not seem to be the background of someone destined for monarchial greatness. She inherited a country that was religiously divided, surrounded by hostile powers and whose most recent military campaigns had ended in failure. Hardly the stuff of which world powers are made.

Consider also that, during her reign, she did many things that would cause most any other monarch to be dismissed as a total failure. Starting from a position of friendship she managed to tick off the most powerful nation in Western Europe at the time, supported rebel forces (even republican ones) against the lawful monarchs, had a fellow queen put to death (setting a dangerous precedent for that family), she failed to ever marry and secure the succession by producing legitimat offspiring (which especially at that time was considered probably the first and foremost duty of any monarch) and she suffered one of the most humiliating English defeats at the hands of a rebel army in Ireland. Not looking good is it? She was also vain, jealous, spiteful and, possibly worst of all for a ruler, extremely indecisive. And yet...and yet...she was great. England beat the odds, put down the first roots of a global empire, humbled the mightiest powers in Europe, experienced a flowering of art, music and literature all under her reign to the point that even her most bitter enemies could only stand amazed at what she accomplished.
Posted by MadMonarchist at 10:48 AM