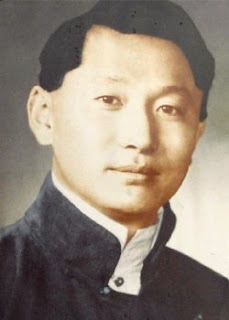 The twelfth and last King of Sikkim was born Prince Palden Thondup Namgyal on May 23, 1923 to King Tashi Namgyal whose reign saw the transfer of Sikkim as a protectorate of the British Empire to a protectorate of India. As a child Prince Palden was sent to St Joseph’s Convent in Kalimpong for his education but was later forced to leave due to a long bout of malaria. In the tradition of Sikkim, a Buddhist kingdom (the Prince’s father had been born in Tibet and crowned by the Dalai Lama) from the age of 8 to 11 Prince Palden studied to become a monk under his uncle Rimpoche Lhatsun and was recognized as the reincarnation of the leaders of Phodong and Rumtek monasteries. He later furthered his education at St Joseph’s College in Darjeeling (previously ceded to Britain by Sikkim) and he graduated from Bishop Cotton School in Simla in 1941.

To prepare him for his future leadership role Prince Palden was given the position of internal affairs advisor by his father and he led the team of negotiators which worked out the special relationship between the newly independent India and the Kingdom of Sikkim. In 1950 he married his first wife, Sangey Deki, daughter of a Tibetan nobleman, by whom he had two children. Unfortunately, the princess died in 1957. In 1963, however, United States and world attention came to Sikkim when the Prince married the 22-year-old New York native Hope Cooke. The couple eventually had two children; Prince Palden and Princess Hope Leezum. At that time many people in America and the wider world had never heard of Sikkim but they were impressed by what they saw, a peaceful little country of friendly, religious people who lived modestly but happily. However, the victory of republicanism in India and growing tensions due to political changes there and in China and Tibet meant that troublesome times were ahead.

On December 2, 1963, upon the death of his father, Palden Thondup Namgyal became Chogyal or King of Sikkim. As is the tradition in Sikkim (and other countries in the region) his coronation did not take place until 1965 on a date determined as particularly auspicious by the court astrologers. A great deal of nonsense has been written about the last King of Sikkim; that he was incompetent, erratic, never respected, widely unpopular and ineffective. That, of course, comes from those sources opposed to the monarchy from the start and since then from those who have a vested interest in upholding the loss of independence. Originally, the core of opposition to the King came from the (no surprise) professional politicians, especially the largely Nepalese bureaucrats who formed their own cabal to bring down the monarchy in 1973. For those inclined to view the last King of Sikkim as a failure, a few statistics are worth remembering (and lest anyone think these come from a biased source, that source is Time magazine -hardly a monarchist publication). During his reign literacy in Sikkim rose from 25% to over 40%, the number of children attending school quadrupled, government revenues doubled, road mileage tripled, average per-capita income rose by a third and electricity became widely available for the first time in history.

When problems arose they came from areas beyond the King’s control such as a particularly harsh monsoon season late in his reign which caused floods and landslides that caused $28 million in damages; roughly 14 times the entire annual budget of the little kingdom. And on that occasion both the King and Queen spent a month traveling across country by jeep and horseback to survey the damage and help in any way they could. There were also increasing tensions with India with whom both the King and his father had always tried to maintain good relations. The tiny army of Sikkim were equipped by India and had Indian officers in charge of them so any impartial observer could hardly view Sikkim as a threat to India or in any way hostile or distrustful of them. Yet, the conspiracy to bring down the monarchy pushed forward, there was trumped up agitation by the professional rabble-rousers and anything was used as an excuse to argue for the end of the monarchy and annexation by India. Even an article written by the Queen pointing out borderlands that had previously belonged to Sikkim but which were then ruled by India were used to paint the monarchy as ambition, perhaps even dangerous. It was a farce of course, the second most populous country on earth declaring that a tiny mountain kingdom with a 300-man army led by Indian officers was a threat!

Nonetheless, in 1974 India moved to occupy and annex Sikkim. On April 8, 1975 tanks and infantry of the Indian army surrounded the palace, killing one of the King’s guards. The King could do little except to write to Mrs. Indira Gandhi who had ordered the invasion, expressing his dismay. Of course, nothing was done. The King was deposed, kept under surveillance by Indian authorities and after a rather suspect referendum, while under Indian occupation remember, which resulted in a ridiculous 97% vote in favor of annexation, Sikkim became the 22nd state of the Indian Union on May 16, 1975. After that time, the life of the powerless King Palden Thondup Namgyal became a succession of tragedies. In 1980 he and his wife, Queen Hope, divorced and not long after the former monarch died of cancer in New York City on January 29, 1982. Seeing his suffering and downward spiral after losing his country, however, many of his people said the real cause of his death was a broken heart.

Today, there is still a King in Sikkim, the second son of King Palden Thondup Namgyal, King Wangchuck Namgyal, however he is a ceremonial monarch only and simply participates in an unofficial capacity in local cultural and religious ceremonies. Many in Sikkim still blame India for fomenting the troubles that were the pretext for their annexation and there are still those in Sikkim today who advocate for a restoration of their monarchy.
Posted by MadMonarchist at 1:18 AM