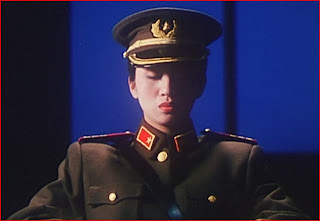 “The Last Princess of Manchuria” was a 1990 Hong Kong bio-pic of the Manchurian princess known as “Eastern Jewel”, Kawashima Yoshiko, Kam Bik Fai and so on. Because of her reputation as a seductress and a spy she has sometimes been called the “Eastern Mata Hari” and because of her military deeds the more sympathetic Japanese press sometimes dubbed her the “Joan of Arc of Manchuria”. The film was directed by Eddie Ling-Ching Fong and starred Anita Mui in the title role. The look of the film may seem somewhat dated, but for those of us who look with nostalgia on the 1980’s this will not be a problem. What some may find a little hard to ignore is all of these very northeast Asian characters speaking Cantonese but those unfamiliar with Far East languages will take no notice of this. Though a product of the (then) British Crown Colony of Hong Kong, I was pleasantly surprised when I first saw the movie that the character of the controversial princess was not devoid of sympathy.

The film is told mostly in flashback, starting with the princess in prison and on trial by the Republic of China at the end of World War II, her life story unfolds and then the trial resumes at the passing of judgment on her. If this style seems familiar it should as it was no coincidence that this same method was used in the film “The Last Emperor”. The producers of the film made a conscious effort to emulate the success of that epic drama with this film and, fans of the “The Last Emperor” will also remember the appearance of Eastern Jewel in the latter part of the movie played by Maggie Han. Obviously some of the same historical figures from that film appear in this one such as the last Emperor himself, the Empress “Elizabeth” and the Japanese filmmaker Amakasu, played in this film by Tung-Shing Yee. Obviously, due to time constraints, not every aspect of her life could be covered in detail, but they did a pretty good job of covering the main events from start to finish and giving the viewer some idea of what Eastern Jewel did what she did and why she was the sort of woman she was.

The flashback starts in the Peking of late Imperial China as the little child princess learns that she is to be sent to Japan. Sad but dutiful, she departs and excels at martial arts in school, eventually learning of the death of her parents and feeling the first glimpse of the struggle she will face throughout her life; where does she fit in? Is she Manchurian, Chinese, Japanese? Denied her true love, assaulted by her adopted father and forced to marry a Mongolian prince she finally rebels against being used as a tool by those around her and determines to be the master of her own destiny. After a brief visit to Japan to tell off her adopted father she sets out on her own in China and it is at this point that probably the most notable extension of ‘dramatic license’ is taken. While being mugged by a gang of thievish “missionaries” Eastern Jewel aka Kawashima Yoshiko is rescued by the kung fu-fighting opera star with the unfortunate name of “Fook” (after whom the Princess more unfortunately names her pet monkey “Ah Fook”) played by Andy Lau. Again, there is a genuine connection for the much mistreated princess but we see a hint of hurt as well as anger in her when they realize that their two visions of the future for China can never be reconciled. He is an ardent republican nationalist, she wishes the imperial monarchy and the honor of her family restored to glory.

Using all the means at her disposal, which at that point are simply her feminine wilds, the princess joins the Japanese forces of the Kwantung Army, rapidly rising as the favorite of the (rather over-acted) Commander Tanaka. Some more dramatic license is taken when the Qing princess is recruited to use a combination of force and blackmail to get the Empress Wan Jung to go to Manchuria as her husband, the last Emperor (who appears once) will not leave without her. She is not exactly thrilled with her place in the Japanese operation, but she looks to no one else to correct this and remains as ruthless and resourceful in ensuring her survival and advancement. I thought there was a chance for something much better when the princess took command of the Anguo Army but that period in her life was cut rather short. There is an assassination attempt (a mysterious one) and she is sent to Tianjin to run a thinly-veiled spy ring using a restaurant as a front. However, her operation is attacked by republican agents led by, you guessed it, Fook. This invented effort at romance (though the opera performances had a bewildering intoxication about them that was good) was probably the weakest part of the film in my view.

In her treatment of Fook we see another glimpse of the humanity of the star of the movie who is of course clearly portrayed as a villain. Yet, even the most adamant might be moved to some sympathy by her downfall with the defeat of Japan at the end of the war when she is abandoned by all and surrounded by enemies. The end is left with just a tad of ambiguity so that those wishing for something more can at least indulge their imaginations -if they so choose. Overall, I liked the movie though I am biased by my interest in the main character. It is, as stated, dated and there are plenty of flaws that those used to the standards of Hollywood will surely notice. However, if Anita Mui was always at her greatest as a singer she at least proved worthy of her salary as an actress as well. As stated, the “good guys” and the “bad guys” are pretty starkly identified, which is to be expected, yet I was pleasantly surprised that they were honest enough in this film to at least provoke a little sympathy for the Eastern Jewel. If she did unsavory things in her life we can at least see why, get some clue as to what made her have the attitude she did, and that she was not entirely selfish but also fighting, scheming and plotting for a future she truly felt would be greater than that of the republic.

Posted by MadMonarchist at 12:48 AM