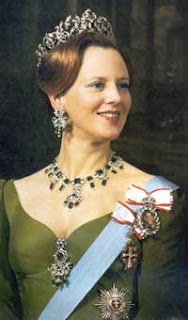 Congratulations to Her Majesty Queen Margrethe II of Denmark, one of my favorite reigning monarchs today. It was on this day in 1972 that Margrethe II, daughter of King Frederick IX of Denmark, ascended the throne of the oldest monarchy in Europe. For 39 years she has devoted herself to her country and remains surely the most beloved figure in national life. I admire her, as much for her many good deeds and humanitarian projects, for her independent attitude. Long criticized for her smoking habit she has consistently refused to give in to the new anti-smoking fashion (note* The Mad Monarchist does not advise anyone to start smoking) and has stated on more than a few occasions that it is nobody else's business if she smokes. She has also been known to wear fur on occasion and when once criticized for doing so while on a visit to Britain, the bold and dazzling Danish Queen said pointedly that in her country people were free to wear what they liked. I loved that answer.

The Queen, who is also a great artist in her own right, has suffered a great deal over the years from arthritis but she has never showed any sign that anything could get the better of her. She ruffled some feathers (and brought a smile to my face -that's usually how it works) when she addressed the recent increase in non-Danish and non-European immigrants living i 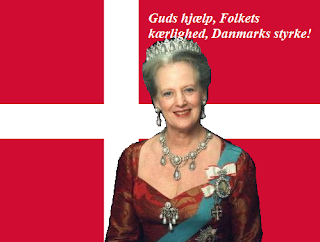 n Denmark and stressed the need for assimilation, the preservation of the Danish identity and once even suggested that Denmark might not be the right country for everyone to run to if they are not prepared to adapt to the prevailing culture. She has been a treasure and Denmark is fortunate to have her. She is also the first Danish monarch named Margrethe since the time of the Kalmar Union in 1412. Her motto is quite appropriate: God's help, the love of The People, Denmark's strength. Queen Margrethe II has done an admirable job and The Mad Monarchist sends her and all her people heartfelt congratulations on the anniversary of her accession. Long live the Queen!
Posted by MadMonarchist at 6:38 AM