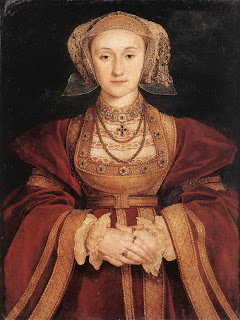 Anne of Cleves, fourth of the six wives of King Henry VIII of England, has the distinction of being wife to the massive monarch for a shorter period than any other and yet, arguably, coming out of the experience better off than any of those before or after her. She was born Anna von Jülich-Kleve-Berg on September 22, 1515 in Düsseldorf, Germany to the Duke of Cleves who was known for his friendship with Erasmus and his staunch but moderate Protestantism. Her mother was Catholic but her father had opposed the Holy Roman Emperor Charles V and over the years her family became quite famous among the Protestants of Germany and thus came to a measure of fame in the Protestant community across Europe. This was the primary reason for her recommendation to the post of queen consort of England, though that was certainly not her idea as she was a famously naïve and innocent young lady. She had, early in life, been betrothed to the 10-year-old future Duke of Lorraine but this was broken off. It was the Chancellor of England, Thomas Cromwell, who first proposed the match to King Henry VIII.

The King had been disinterested in marriage since the death of his last queen, Jane Seymour, with whom the King had, at times, had a stormy relationship with but who had since been elevated to the status of the ideal wife; she had given the king his long sought after son and heir and she was now dead. Who could compete with Jane? King Henry VIII had divorced one wife and executed another, provoked wars and rebellions and changed the religion of his country in his drive to have a son. Now that he had one he was in no hurry to start the process all over again. However, Thomas Cromwell wanted the King to marry. Never a real Protestant at heart, there was always a fear of the King being drawn back into the Catholic camp and Cromwell had long ago nailed his colors to the mast of the Church of England. A Protestant marriage was what was called for and probably the only possibility as most of the other prestigious royal ladies were Catholic and no royal woman was anxious to marry the King of England who had humiliated, divorced and imprisoned his first wife and had his second beheaded.

Cromwell discovered Anne of Cleves who seemed like the ideal choice. He knew nearly nothing about the woman herself but the German state was minor enough to embrace the idea of one of their own becoming Queen of England despite the unsavory marital history of the King and the duchy was, like England, opposed to the Emperor and could prove a useful, if minor, ally against him. The marriage would also ensure that King Henry and England with him remained firmly Protestant. With any luck she might even give him a royal ‘spare’ as added insurance against the loss of the rather frail Prince Edward. The King was finally persuaded to look into it and he sent Holbein over to paint a portrait of the lady as Henry VIII, having no real desire for a wife, wanted someone physically attractive if he was going to go to the trouble of marrying at all. Impressed with the results, Henry decided he would have her and the marriage negotiations began, resulting in a very binding contract with no small amount of what we would today call “small print”. Cleves may have been anxious to have one of their own as queen but they were under no illusions as to what Henry was capable of when it came to dealing with his wives.

Finally talked into eager anticipation (by himself as well as Cromwell) the King was looking forward to meeting her. When he did, however, he was less than impressed to say the least. He found her utterly repugnant and though he forced himself to be polite in her presence he heaped the most descriptive insults on her to others and referred to Anne, famously, as the “Flanders Mare” though from her portraits she does not seem very equine in appearance nor was she from Flanders. Henry VIII tried to get out of the marriage and was positively enraged with Thomas Cromwell for putting him into such a position, yet, the marriage contract was so iron-clad that no way out was found. The German court had taken great care to ensure that Anne of Cleves did not go the way of the tragic Catherine of Aragon. On January 6, 1540 Anne and King Henry were married by Archbishop Cranmer in Greenwich. Henry did not consummate the marriage and cast doubts on her virginity, yet based on Anne’s comments it seems she was completely innocent of the ‘facts of life’.

Less than seven months later, all the while Henry doing his best to avoid his wife, the marriage was finally annulled after a suitable agreement was reached by which Anne of Cleves could be assured of a comfortable life for the rest of her days. She was to hold the status of the King’s “sister”, given a generous pension and fine accommodations for agreeing to the annulment which was given on the grounds of non-consummation and her previous childhood betrothal to the Duke of Lorraine. The discarded Queen seemed to take it all in stride and she certainly fared better than Thomas Cromwell who was sent to his death at the hands of an incompetent executioner for the high crime of giving the King a wife that displeased him. There must have been some hard feelings on the part of Anne and the Cleves house, such would only be natural, yet after Henry had his next wife sent to the chopping block Anne’s brother the Duke actually suggested Henry and Anne be remarried but of course the King would have none of that.

Anne of Cleves remained fairly popular and well liked by those around her and the Tudor Royal Family for the rest of her life. She kept on good terms with all and made no trouble for anyone. When Henry VIII died she greeted the new Queen Mary I and Princess Elizabeth when they arrived in London and she was present at the coronation of Queen Mary. When the Queen brought England back into religious union with Rome, Anne of Cleves, recommended because of her Protestant faith, accepted the change and became a Roman Catholic. Her family might not have approved, staunch Lutherans that they were, but neither had they approved of her adherence to the Anglicanism of Henry VIII so that was not much of a surprise. Again, she kept mostly to herself, stayed out of politics but remained friendly with Queen Mary I, congratulating her on her marriage to King Philip II of Spain. Mary provided her with a new residence at Chelsea Old Manor when her health began to fail and Anne of Cleves died on July 16, 1557 just before turning 42. She was buried in Westminster Abbey, the most unloved wife of Henry VIII yet the one who had outlived all the rest.
Posted by MadMonarchist at 1:08 AM