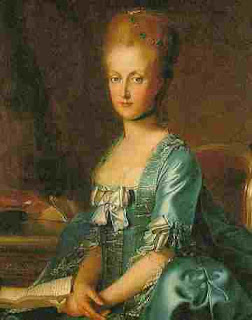 One of those royals who was famously converted to conservatism after being confronted with the harsh realities of revolution was Maria Carolina of Austria who was the Queen of Naples. She was born Archduchess Maria Carolina in Vienna, the thirteenth child of the prolific power couple Holy Roman Emperor Francis I and Empress Maria Theresa of Austria. Her godfather was King Louis XV of France and she was said to look the most like her mother who was a very formidable and outstanding woman. Her favorite sibling was her ill-fated sister Marie Antoinette and the two girls got up to such mischief that their mother had to separate them because they were always causing trouble. Empress Maria Theresa, who was a very astute stateswoman, wanted a marriage alliance with the Bourbon Royal Family of southern Italy (the Spanish branch that ruled Naples & Sicily) to keep Austria and Spain allied. Originally it was Archduchess Maria Josepha who was supposed to marry King Ferdinand IV of Naples but when she died of smallpox the duty fell on young Maria Carolina because the only other choice was considered too old.

Maria Carolina was not too happy about this and threw a fit, saying that no good ever came to those who married into the House of Naples. Personal preference, of course, did not come into these things and Maria Carolina and Ferdinand IV were married by proxy on April 7, 1768. When husband and wife met they seemed quite different. Ferdinand was a rather simple man, more comfortable talking to a workingman on the street than elites in the palace. Queen Maria Carolina on the other hand was a very complex and complicated person. She was very kind, very intelligent, curious, generous and compassionate but she could also be imperious and ruthless toward enemies and she knew how to hold a grudge. However, in spite of their problems, the new King and Queen of Naples had 18 children so Maria Carolina was made of tough stuff, though not all of them survived, an army nonetheless. Many people sympathized with her, thinking the king rather crude and it was true that Maria Carolina was often unhappy but she did her duty like the professional royal she was, no matter how upset she would get at her husband eating spaghetti with his fingers in the royal box at the opera.

Particularly after the birth of her son Francis she became extremely influential in Naples and ran the place to large extent. She kept an eye on being a help to Austria but she was also much taken with the fashionable trend of the liberalism of the “Enlightenment”. She employed the Englishman John Acton in reforming the Neapolitan army, finances and he finally became prime minister all amidst gossip that Acton and the Queen were having an affair. She supported the work of many liberal thinkers, artists and so on and even when trouble began brewing in France she was originally supportive of many of the ideals of the revolutionaries. However, that all changed of course when the monarchy was abolished and seeing the results of the ideas she had once championed, she totally reversed herself. It became worse when poor Marie Antoinette was executed and forever after Maria Carolina carried a portrait of her sister with her and vowed to avenge her death. It was due to her influence that her husband put the Kingdom of Naples in the First Coalition of European powers against the French republic.

Of course, things did not go so well and in the wake of hostilities the local revolutionaries in Naples tried to overthrow their monarchy, which they did on the mainland at least, establishing a republic while the King and Queen Maria Carolina had to escape to Sicily to continue their opposition to the revolutionaries. The British Royal Navy helped protect them there and finally the royalist forces were able to retake Naples and Queen Maria Carolina took a leading role in bringing down the republic and meting out strict punishments to the revolutionaries. About 1,000 were charged with treason and 100 ringleaders were hanged or beheaded for their betrayal. Later, under the more able leadership of Napoleon, the French invaded the Kingdom of Naples and once again the King and Queen sailed to Sicily. In 1812 King Ferdinand abdicated, passing the throne to Francis under a regent and Queen Maria Carolina had no more influence and went home to Austria. She died there on September 8, 1814 unable to see the final defeat of France she so desired.

Queen Maria Carolina is an example of many of the “Enlightenment” characters who were shocked to their senses by the French Revolution. They imagined liberal progress occurring under the guidance of wise monarchs and the educated elite of society (such as the Freemasons which she allowed back in Naples after they had been banned before) but of course once the fire was lit nothing could stop it burning out of control and bringing down the world as they knew it. As a result she became as ardent a counterrevolutionary as one could find. She is also an example of what a real royal thoroughbred was expected to be. She never found much personal happiness but it was her duty to be the Queen of Naples and she was a zealous queen just as she did her duty in securing the succession by having plenty of children. She did her job, putting duty first and personal happiness second.
Posted by MadMonarchist at 12:21 AM