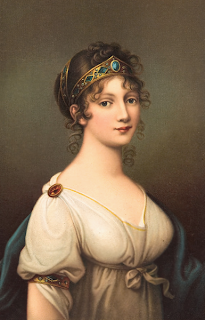 Probably no other Queen-consort in German history is so famous as Queen Louise of Prussia, wife of King Friedrich Wilhelm III. In the face of the greatest threat the Kingdom of Prussia would ever face it was this young queen who provided her people with a source of inspiration and moral courage. She was born Duchess Louise Augusta Wilhelmina Amalie of Mecklenburg-Strelitz in Hanover on March 10, 1776. Her father the Duke was governor of Hanover for King George III of Great Britain and her mother was of the Hessian ruling family. Her mother died when she was only six and this left Louise with a lifelong sympathy for orphans, reinforced by her own upbringing which was rather more modest than most would expect of a princess and in which charity was stressed. Her father remarried and Louise got along well with her stepmother but when she died as well her broken father took his children to Darmstadt to be raised by his Hessian mother-in-law Landgravine Marie Louise.

Louise grew up well educated, more fluent in French than German (which was not uncommon at the time), very well read and early on was recognized as a great beauty. Her father arranged for her to meet the heir to the Prussian throne when she was 17 and the serious, conservative, Christian crown prince immediately fell in love with her, as planned, and quickly announced that he would have no other for his wife. On December 24, 1793 the couple were married and the new crown princess was welcomed to Berlin with ecstatic enthusiasm. She was described as possessing an “inner nobility” and a heart of “angelic goodness”. Her husband called her “the princess of princesses” and the two were very devoted to each other. Sadly, their first child was stillborn but, fortunately, nine healthy children followed in quick succession. Famous for her compassion and charity, when she became Queen on November 16, 1797 when her husband became King Friedrich Wilhelm III of Prussia, her only thought was how much more she would then be able to help.

The new King and Queen toured Prussia and for the first time a royal consort became a celebrity. She was remarkable for being so different from those who had gone before her and yet, unlike others in similar situations, she was always supportive of her husband from first to last and never tried to compete with him or rival him even though many whispered that she was the more intelligent of the two. Despite the efforts of some to gain her support for war she sided with her husband in trying to keep Prussia out of the French Revolutionary and later Napoleonic Wars. Yet, war finally came and the King cast his lot with the recently victorious French. The Queen preferred war against France and after a time the King was finally persuaded to join the Allies. Queen Louise, appearing like an Amazon one observer said, accompanied her husband on campaign to the battle of Jena where, unfortunately for them, the Prussians were soundly defeated by Napoleon and the King and Queen had to hastily abandon the field to avoid capture.

In probably the darkest period of their history before 1945, French troops occupied Berlin and Queen Louise, who had taken ill, had to flee with the King to East Prussia with no food or water. Few people despised the French Emperor as much as Queen Louise, yet she met with him at Tilsit to try to obtain better terms of peace for Prussia. Napoleon was impressed by her but not moved to mercy. From that point on Queen Louise did all in her power to encourage her people to hold on until the day of vengeance. She backed reform efforts in the government and military, boosted morale in the army and the public at large, leading Napoleon to remark that Queen Louise was, “the only real man in Prussia”. She tried to look at the bright side even in so dark a period and from the soldiers and ministers to her own children expected that their suffering would only steel them to greater accomplishments in the future.

Her marriage remained a happy one but observers noted that the Queen who was once so joyful and boisterous had taken on an aura of iron determination. She would not, alas, live to see the final victory of her beloved country. After being frequently ill for quite some time she passed away in the arms of her beloved husband on July 19, 1810. The Prussians went into deep mourning and even the French Emperor remarked that the King, “has lost his best minister”. Her people, however, did not forget her and she became something of a patron saint in the wave of patriotic nationalism that ultimately swept Prussia to final victory over Napoleon.
Posted by MadMonarchist at 12:17 AM