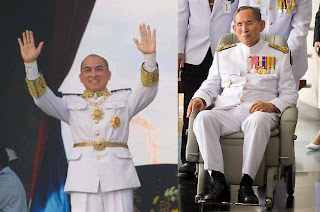 The soldiers of the kingdoms of Cambodia and Thailand have exchanged fire in an on-going territorial dispute over a mountain-top temple (Preah Vihear) on the disputed border between the two countries, a temple which has been named as a World Heritage Site by the UN. We have reported on this dispute previously in 2009 and things are heating up again. In the past the situation was worsened by the presence of ousted Thai PM and media mogul Thaksin Shinawatra in Cambodia. The underlying problem here; the border dispute, is a very, very old one and has been the focus of hostilities for the Kingdom of Thailand and the Khmer Rouge regime in Cambodia, the colonial government of French Indochina and previous clashes between the Siamese and the Cambodians and the old Vietnamese emperors. It is unfortunate that two members of an endangered species (monarchies) are engaged in hostilities but it should also be kept in mind that the two monarchs have nothing to do with this.

The King of Thailand, because of his infirmity, remains largely unseen under close medical care and observation. The King of Cambodia (and his father) have little if anything to do with state policy in Cambodia which has been under the rule of the communist Hun Sen ever since the Vietnamese invasion that drove Pol Pot from power. In some ways this is the front line of the still lingering "cold war" in East Asia as Thailand is more closely allied with the United States whereas Cambodia (like Laos) remains under the primary 'watch' of Communist Vietnam and is also closely allied with Communist China and North Korea. Shots have been exchanged for several days now and there are reports from at least one side that the temple at the center of this has been damaged though that report came only from the Cambodian side who naturally accuse Thailand, specifically Thai artillery, of being responsible for the damage. There are also wider issues behind this tension such as the aforementioned position given to the convicted criminal and former Thai PM Thaksin Shinawatra in Cambodia. His "red shirts" have been the cause of considerable unrest in Thailand and the fact that he was harbored by the pro-communist regime of Hun Sen in Cambodia held a significance not lost on the government of Thailand who have accused Cambodia of being complicent in the unrest in Thailand with the "red shirts".

Hun Sen has also used this on-going tension to maintain his hold on power, using it as a ready-made excuse to heat things up in order to justify deploying troops at election time to ensure his victory (he has won every election since the foundation of the constitutional monarchy) and recently has also used it as a way to raise the prestige of his son who Hun Sen recently promoted to general and top commander of the Cambodian army. Given that, there seems little hope that this situation will be settled since it serves the purposes of those in power in Cambodia to keep a little bit of trouble brewing on the sidelines.
Posted by MadMonarchist at 3:03 PM