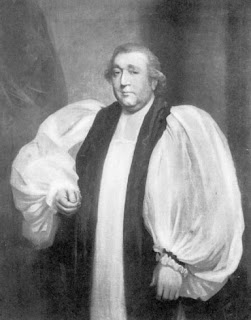 Samuel Seabury was born in Groton, Connecticut on November 30, 1729. His father had started out as Congregationalist preacher but ended up becoming a deacon and later priest of the Church of England, which was the path his son would follow as well. Young Samuel went to Yale University, studied theology and graduated in 1748. For a time he went to Scotland and studied medicine at Edinburgh for a year before being ordained a deacon by the bishop of Lincoln and later a priest by the bishop of Carlisle in 1753. For a time he was the rector of a church in New Jersey but spent most of his clerical career in New York. When political tensions between the Crown and the colonies started coming to a boil he pointed to the words of St Paul and advised Christians to avoid any sort of controversy. He stressed that it was the duty of Christians not to strive but to accept what God hands down for them. In time he became quite a controversial figure (certainly for someone who preached avoiding it) simply because he became so identified with the loyalist position.

Drawn more and more into the political fray by events surrounding him, one of the points he was particularly opposed to was the sudden springing up of all sorts of committees, congresses and other representative bodies (all dissident) which claimed governmental authority over the areas in which they resided. In April of 1775 Reverend Seabury was among the signers of the White Plains protest which voiced strong disapproval of these representative bodies which had no legal validity but provided some illusion at least of legality for the fomenting of rebellion. Throughout 1774 and 1775 he engaged in a ‘war of letters’ with Alexander Hamilton, largely over the legality and authority of these bodies as well as the Continental Congress which came to be the preeminent one. One of the things that certainly touched on Seabury, and which is often ignored, is the level of hatred and the vitriol that was leveled against the clergy and the Church of England in general by the “patriot” faction. It was only natural that he would see the cause of the Anglican Church, at the top of whose hierarchy sat the King, and the cause of the Crown as one and the same.

All of these exchanges established Seabury as a masterful writer but it also made him hated and despised by the revolutionary party and in November of 1775 local patriots arrested him (though kidnapping would be a better term as they had no legal authority) and kept him in prison in Connecticut for six weeks. Unable to produce any evidence of criminal activity and not really wanting a full-blown conflict on the religious as well as political fronts the rebels finally released him but ensured that he did not write or preach any of his pro-monarchy sentiments. Finally, Seabury was able to reach Long Island and moved to New York City which was much more loyalist in overall sympathy. The British occupied New York early in the war and held it throughout and this enabled Seabury to continue his ministry without fear of arrest or imprisonment. In 1778 the British recognized him by appointing him chaplain to the King’s American Regiment. When the war finally ended in a British withdrawal Seabury did not go to England or Canada like most loyalists but stayed behind, moving back to his home state of Connecticut and, now that the issue had been decided, professed himself loyal to the new government of the United States.

In 1783 Seabury was elected bishop by a council of ten Anglican clergymen in Connecticut. However, with no Anglican bishops in America, he could not be consecrated. He went to London to get the job done but no bishop there would consecrate him because his American citizenship precluded him taking an oath of loyalty to King George III (and the Church of England was a little more hard nosed about such things back then). So, the following year he went to Scotland and was ordained bishop in Aberdeen as numerous bishops of the Scottish Episcopal Church did not recognize the authority of King George III either (and would not until the death of Prince Charles Edward Stuart) on the condition that he would adopt the Scottish rite for communion in America rather than the English rite of 1662. This actually prompted the Church of England to make provision for ordaining bishops outside of the British Empire since the ordination of Seabury caused Parliament to fear that the Anglican church in America would become an entirely Jacobite entity.

More bishops were ordained later and the relationship between the Church of England in America and in England was normalized thanks in no small part to Bishop Seabury who also can be credited with much of the liturgy and organization of the American Episcopal Church. In addition to being the first bishop of said church he was also chosen the second Presiding Bishop of the Episcopal Church. Faithful to his promise, he continued to show favor to Scottish styles and this led the Episcopal Church to have a liturgy slightly more old fashioned or even Roman Catholic and Orthodox than the Church of England of the time. Unusually for Protestant churches at the time he advocated receiving communion every week and wrote about the benefits of frequent communion. He remained a very talented administrator and organizer as well as a fairly conservative and traditional churchman, quite respected by the time of his death on February 25, 1796.
Posted by MadMonarchist at 12:38 AM