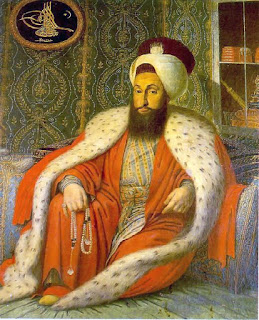 Selim III was born in Constantinople on December 24, 1761 to Sultan Mustafa III and his Genoese consort (who had been captured by the Ottomans) Mihrisah. As he grew up he was known for his zeal and openness to innovation and reform. It was hoped that when he came to the throne of the Ottoman Empire he would usher in a new era of modernization and revitalization. In the tumultuous year of 1789 he succeeded his uncle Abdulhamid I as Sultan and Padishah of the Ottoman Empire, “shadow of God on earth”, Caliph of the Faithful and Servant of the Cities of Mecca, Medina, etc. He had more experience with foreigners than others in the Osman dynasty and was fully convinced of the need for reform but he was also unwilling to abandon what his predecessors had handed down to him and he continued the wars which had been raging against Austria and Russia since 1788 in the Balkans.

Despite Europe becoming focused on the outbreak of the French Revolution, the backward state of the Turkish military establishment meant that Selim III was obliged to make peace, surrendering the Crimea to Russia but regaining Belgrade from the Austrians at the conference table. During the respite he tried to institute the long hoped for reforms, such as in bureaucratic salaries to discourage corruption, extending education and hiring European instructors to train a new military corps in the latest tactics. However, Selim III was never able to concentrate fully on these efforts as conflict was almost constant. The French, under Napoleon Bonaparte, invaded Egypt, inflicting a number of humiliating defeats on the empire. To make matters worse, the oppression of Pasvan Oglu, Governor of Vidin, caused the Serbs to rise up in revolt under the leadership of “Black George” Petrovich. Massive Ottoman forces finally crushed the rebellion but the reinstatement of the former governor showed that the lesson had not been learned.

Adrianople also erupted in rebellion in 1804 and there was also growing trouble from a new religious movement founded by Abdul Wahhab which preached a more strict application of Islamic law, rejected all luxury, innovation, and the adoration of saints or even the Prophet Mohammed rather than God. This was the start of the Wahhabi movement many today are only too familiar with. Their rebellion began in Nejd and denounced the lavish lifestyle of the Sultans, what they perceived as a lack of faithfulness among the people and the introduction of European ideas into the empire. It is interesting to note that while atheist revolutionaries were making trouble in France and throughout Europe, in the Ottoman Empire it was religious fundamentalists who were doing the same but advocating a totally opposite direction. Many also opposed the reforms of the Selim III, having established themselves through the old way of doing business. In 1806 disputes over Wallachia, Moldavia and Bessarabia caused the Sultan to renew the war with Russia. Also, having patched things up with the French, the British and Russians began to worry about a renewed Franco-Turkish alliance and in 1807 the British sent a naval force to raid Constantinople, which the Turks managed to repel.

However, even while war with Russia was raging, as was far from uncommon sadly, there was a rebellion of the Janissaries, the household guard of the Sultan. For some time the Janissaries had lifted up sultans and torn them down as served their own interests and when Selim III began establishing his own corps of soldiers trained and led by Europeans who would be most loyal to him, the Janissaries saw this as a threat and rose up. Other elements opposed to the reform efforts of Selim III joined in and the rebellion soon spread. Despite his efforts to placate the Janissaries and back away from his previous modernization efforts, Selim III was deposed by the Janissaries and replaced with his nephew, Sultan Mustafa IV. Forces loyal to the deposed sultan tried to come to his aid but were too late as by the time they arrived Selim III had been murdered by the chief Black eunuch of the seraglio on July 28, 1808. Mustafa IV was deposed and later killed and Selim’s brother became sultan and worked to carry out his brother’s vision for the future.
Posted by MadMonarchist at 12:44 AM