First we have the ensign of the Spanish Empire which probably flew over Texas longer than any other covering the centuries during which Texas was part of the Viceroyalty of New Spain based out of Mexico City. This Spanish flag is often flown wherever the famous Six Flags of Texas are displayed, though sometimes the ignorant mistakenly fly the modern Spanish flag because it is so similar. This version was the Spanish flag from 1785 to 1843 but was revived later as well. This was the last European flag to fly over Texas soil.

This, rather historic, Spanish flag is also often seen in Texas where the Six Flags of Texas are displayed. If the Imperial Spanish flag is not seen it is usually this flag, the flag of the combined kingdoms of Leon and Castile, which is flown. For some it may be the flag most associated with the Spanish period even though it was probably not seen much if at all in Texas during that time since it was rather out of date by the time the Spanish started getting serious about moving in to Texas to settle and establish missions and presidios and so on. However, it is fairly well recognized and widely available in Texas flag stores. 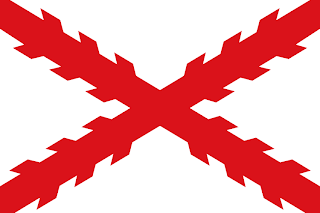 The Cross of Burgundy, used as something like a battle flag by Spanish royal forces, was certainly used during the era of Spanish rule. A version of this flag was used as the flag of New Spain of which Texas was a part. It is not, however, that well known or widely available, though I was able to get one at my usual flag store. The only place I recall seeing one flying was at one of the historic Spanish missions in San Antonio, I think Mission San Jose which is the largest of all of them.

Probably the most commonly seen French flag in Texas is the white Bourbon flag of the Kingdom of France which is commonly flown wherever the Six Flags of Texas are displayed. It is delightful to me that one can travel all over Texas and see French flags all over the place but never a tricolor among them. Because it is so often used in displays of the Six Flags it is readily available at Texas flag stores and I have one myself and make a point to fly it on Bastille Day.

Besides the white flag the most common French flag seen in Texas is the blue flag with three lilies. Again, it can often be seen representing France among the Six Flags of Texas though in my experience I would say it is slightly less common than the white flag. Any shop that sells historic flags in Texas (and most flag stores do) will have one. As readers will know, the famous French explorer La Salle established a fort on the Texas coast for a brief time and part of north Texas was claimed as part of the Louisiana Territory which eventually led to border disputes between the United States and the Kingdom of Spain. 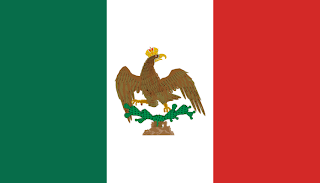 This flag, unfortunately, you will not see in Texas nor will you ever find one on sale. However, this flag, the flag of the first Mexican Empire (the monarchy of Agustin de Iturbide) was the national flag of Mexico, of which Texas was then part, from the time of independence from Spain in 1821 until the downfall of Iturbide in 1823. It was during the final days of the first Mexican Empire that the first Anglo colonies in Texas were being established. This brief period is, sadly, forgotten, in both Texas and Mexico to large extent and the usual Mexican flag displayed, even in historical sets, is the flag of the modern United Mexican States.

Perhaps the most surprising monarchial flag one can find in Texas is the yellow dragon flag of the Great Qing Empire, the Manchu dynasty of Imperial China, which flies at the Institute of Texan Cultures in San Antonio to represent the Chinese-Texan community. It is believed that this is the only place in the world where the Qing Imperial flag is still flown to represent a modern Chinese community.

A very common flag in Texas, at least in certain areas, is the flag of South Vietnam but most do not recognize it as a monarchial flag which, I suppose it could be argued, technically was not -but very technically. The flag was based on a design used by the short-lived Empire of Vietnam during World War II which was itself based on early Nguyen Dynasty royal flags. This version was adopted by the last Emperor Bao Dai when he was Chief of State of the State of Vietnam which was the predecessor of the Republic of Vietnam. All Vietnamese communities fly this flag (and react with righteous indignation to any display of the communist flag) and it is widely available at flag stores.
Posted by MadMonarchist at 12:29 AM