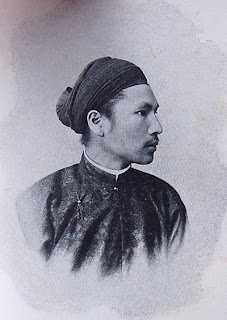 The story of the eighth Vietnamese emperor of the Nguyen Dynasty is a real “rags to riches” story. 1883 had been the “Year of Three Kings” in Vietnam in which a group of powerful mandarins, feuding with each other and the rising power of the French in Vietnam had raised up and torn down three monarchs in succession after the death of the long-reigning Emperor Tu Duc. All of this confusion and turmoil allowed the French to gain a firmer foothold and following the death of Emperor Kien Phuc (who was probably assassinated) the French thought that a younger candidate for the throne would be in their best interest and so officials were dispatched to find the younger brother of Kien Phuc; Nguyen-Phuc Ung Lich. He had been born on July 22, 1872 in the Forbidden City in Hue, but there had never been any thought of him becoming emperor. His mother was a commoner and he lived, as a child, with her in relative poverty in the suburbs around Hue.

When officials from the palace came and took the child in 1884 his mother was frantic, thinking he would be killed. Of course, he was not, and they washed him up, dressed him in yellow silk robes and enthroned him as the Emperor of Vietnam, the Son of Heaven. Despite his lack of a traditional education as princes normally were given the new boy-Emperor Ham Nghi was noted for his intelligence. Although he was too young to know everything that was going on he quickly came to understand that it was the French who were the new, real powers in the country. This was reinforced by certain officials around him, particularly the old regents Nguyen Van Tuong and Ton That Thuyet who were anxious to destroy the French presence to restore their own power. All this time they were secretly planning an uprising, fortifying a remote mountain stronghold to be their base and planning an attack on the French headquarters in Hue. They brought artillery into the Forbidden City and aimed their guns at the French garrison.

In reaction to this, the French stepped up their military patrols and kept an ever closer eye on the court officials and the young emperor which only increased his discontent at their presence. Finally, on the night of July 4, 1885 the regents launched their attack, which failed, but they broke into the imperial apartments, grabbed the little emperor and as many members of the family as they could and fled the Forbidden City to escape French retaliation. Not far from Hue most members of the family decided to go back to Hue and make their peace with the French, fearing that the rebels would not win and that the regents were not really fighting for the dynasty but for their own power. The regents issued their famous “Can Vuong” or “Save the King” decree, calling on the people to rise up against the French and rally to their young monarch in a war against the foreign presence in the country. Little Emperor Ham Nghi endorsed this but he really had very little to do with it, having been taken by force, but he was the figurehead for this massive revolt.

Back in Hue, with most of the Nguyen Dynasty around them, the French invoked the ancient law that Vietnam could not be one day without a king and they enthroned another prince as Emperor Dong Khanh. In his name a war was launched against the rebels under the nominal leadership of the rival Emperor Ham Nghi. Operating out of a base in the mountainous jungles near the Laos border the revolt became a guerilla war against the French colonial presence and, sadly in many cases, also a war against any foreign presence at all with many missionaries and Vietnamese Christians being killed. Some who fought in the name of Emperor Ham Nghi were simply vicious bandits but others, like the mandarin Phan Dinh Phung, were very upright, patriotic and loyal men who commanded very disciplined and well organized military forces. Ultimately, however, they were no match for the Vietnamese loyal to Emperor Dong Khanh and the superior military forces of France. 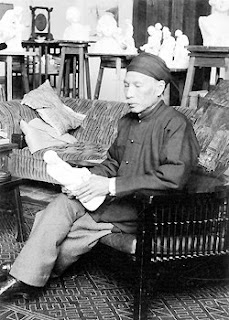 With the war going badly the young emperor was abandoned by the regents and had only Ton That Thiep (son of Ton That Thuyet) and a few servants in a small house near the Nai River with some Muong guards. One of these betrayed him to the French and he was captured and turned over to the colonial authorities on November 2, 1888 after many years of conflict. He refused to betray any of those who had fought for him and some wanted him killed, but, the French reasoned that this might cause further violence and he might prove useful in the future. So, the former Emperor Ham Nghi was exiled to Algeria on December 12, 1888 and he spent most of the rest of his life there. On November 4, 1904 he married a French lady named Marcelle Laloe by whom he had three children; Prince Minh Duc, Princess Nhu May and Princess Nhu Ly. Later, when the officials of another boy-emperor tried to launch a rebellion against the French in World War I there was some talk of restoring Ham Nghi to the throne, but nothing came of it. He died on January 14, 1943 and was buried in France. In 2000 Vietnamese Communist officials approached the last surviving daughter about moving his remains back to Vietnam but permission was evidently refused.
Posted by MadMonarchist at 12:07 AM