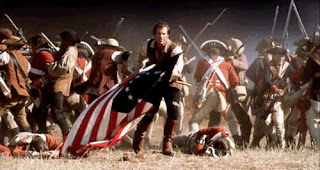 The 2000 film “The Patriot” starring Mel Gibson is one of those movies I like to categorize as a very beautiful, very moving, very well made utter piece of crap. There are so many problems with this movie it is hard to know where to start so I’ll try to begin on a positive note. The movie “looks” fantastic -and since this is a movie and not a radio program that’s important. It is shot well, it really looks like a painting brought to life and there was obviously a great deal of attention to detail. The acting is good all around, though sometimes the players are forced to make the best of very two-dimensional characters. It is moving in a way but is written in so ham-fisted a fashion you feel as though you’re being forced to feel a certain way rather than naturally being caught up in the story and characters. Once again, the characters are almost entirely flat. I know I am getting negative there but I am really having to scrape to find something good to say about this, though, again, the “look” of the movie is fantastic and that goes a long way.

My problems with this cinematic propaganda piece begins with the title. It is called “The Patriot” and yet the main character, Benjamin Martin (Mel Gibson) never does anything out of patriotism. He is a single father when the American Revolution begins and as South Carolina votes on joining the conflict he more or less takes the side of the loyalists. Though his claims to have political leanings toward the patriots he does not think that the grievances of the colonies warrant going to war and he votes against it. During the debate he speaks the famous quote of Mather Byles, asking why they should trade 1 tyrant 3,000 miles away for 3,000 tyrants 1 mile away and he wisely warns that an elected assembly can trample on the rights of a man as easily as any king. That would have been an interesting piece to explore but, of course, we cannot do that because our hero must be a revolutionary, albeit a reluctant one so as not to appear as a warmonger. No, his sulky, rebellious son (Heath Ledger) defies his father to join the Continental Army and Martin resolves to remain neutral and sit out the conflict.

Well, we cannot have that and so to get Martin into the war the British have to murder one of his children. That duty falls on the villainous Colonel William Tavington (a fictionalized version of the historic Lt. Col. Banastre Tarleton). He leads the “Green Dragoons” who, despite their name, wear red uniforms because the filmmakers think we are all idiots who will be confused out of our puny little minds if we see British troops wearing anything other than red (in fact there were Crown forces in the war who wore red, green and blue uniforms). Tavington callously shoots one of the Martin children at which point Benjamin drops his “too proud to fight” attitude and totally goes Rambo on the British, enlisting his remaining pre-pubescent little boys to help him ambush a British column, slaughtering them to the last man with Martin taking a tomahawk to the last survivor in a fashion that Attila the Hun would have called gruesome and over-the-top. I would like to say that this was an isolated incident but it is not and Tavington must continue to slaughter the loved ones of our hero in order to keep him in the war.

This is, of course, entirely unrealistic but that is far from the only aspect that is. What else is there? Well, there is Benjamin Martin who is a plantation owner in colonial South Carolina who owns no slaves. No, all the Africans working for him are happy free men who are forced by the dastardly British into their own ranks. I find it almost comical that it is okay to make the hero of the movie a homicidal maniac who is either totally non-violent or chopping up men like firewood but they cannot show him owning slaves because, historically accurate or not, that would just be unforgivable. In reality, of course, most slaves fought for the British but we cannot mention that. Then of course there is the British troops who shoot little boys and have churches burned to the ground full of women, children and the elderly. That never happened and claiming dramatic license for so horrendous an atrocity really does not begin to excuse it.

Also, considering the aforementioned attention to detail this film was obviously capable of, I find it impossible to excuse the glaring historical inaccuracies and even blatantly impossible absurdities. We are led to believe that Martin and his band of volunteer fighters turn the tide of the war in the south and ultimately defeat the British army of Lord Cornwallis. That, of course, never happened. Lord Cornwallis was never defeated in any battle he fought throughout the campaign in the south until his final surrender at Yorktown. However, the two incidents that really make me slap my head and scream WTF at the screen involve the use of firearms. First, less seriously, there is the pistols. In one scene in which Tavington surprises Martin and his little band we see the British colonel draw his pistol and shoot down a fleeing rebel on a horse at what looks to be easily several hundred yards distance. Now, keep in mind that even a long musket at the time had an effective range of only about 75 yards and pistols could only be anywhere close to accurate at very close range. Were I feeling charitable I could overlook that but the next I could not -it was just insulting. In one scene we see Martin and his militiamen ambush a British column and decimate them with musket fire -IN THE RAIN! Let me repeat that: they ambushed the British with FLINTLOCK muskets in the RAIN! Forget historical advisors, were the filmmakers just retarded?! Had anyone on this whole crew ever fired a flintlock musket before? I have and I can assure you that you cannot fire a flintlock in the damn rain! You will have trouble getting off a shot even if the humidity is too high. It doesn’t take a freaking rocket scientist to understand that a flintlock cannot fire when WET! I really can’t say more about that or I’ll pull something.

Finally, there is the climatic battle which is supposed to be a take on the patriot victory at Cowpens. Again, it is totally inaccurate as Lord Cornwallis was not present at that battle, it was not a very significant affair nor did Colonel Tarleton die in it. Tavington must though because, by that time he had killed two of the Martin children and terrorized the rest so Rambo-Mel must have his vengeance. If it is possible for a battle scene to be over-acted this accomplishes it. You have probably all seen similar efforts; battles in which everyone seems to agree that the victory will go to whoever can scream the loudest. In a hyper-patriotic Yankee-Doodle orgasm Benjamin Martin actually grabs the Stars & Stripes and races across the battlefield like he’s running for a touchdown and impales a horse with Old Glory. Yeah, damn right! Cuz this is ‘Merica! The battle is won, we flash forward to the British surrender at Yorktown and we see everyone set to live happily ever after in this make-believe America. Black and White Americans working happily side by side and Martin ready to settle down to marital bliss with his sister-in-law (yeah, wish I was joking there but, afraid not).

To give credit where credit is due it is at least mentioned (and briefly shown) that the final victory was due to the timely arrival of the French. It isn’t much, but it is something. I also liked the token French character. They made him brusque and rude of course but he was not as stereotyped as I was expecting, being a very rough and tough character. Considering how hyper-nationalistic the movie was and how the British were portrayed as monsters or stiff, tantrum-throwing sissies I was fully prepared for any Frenchman in the film to get the ‘arrogant surrender-monkey’ treatment. Thankfully, the worst excesses in that regard were avoided. However, that does not detract from the fact that anyone hailing from the British Isles will find this movie highly offensive -and rightly so. Again, it “looks” fantastic, absolutely fantastic and that counts for a great deal. However, the characters are flat and unrealistic, just like the story. The British are baby-killing Nazis and the “hero” is not a patriot; just a guy out for revenge against the side who hurt his family. One can completely believe that if a sadistic American officer had killed his son Martin would have just as easily joined the British army and been just as bloodthirsty as those he fought. On the whole, a very grand looking and colorful failure.

(I wanted to end with a catchy war phrase like, ‘Keep your powder dry!’ but if anyone involved in the film happened to read this, that would obviously just confuse them)
Posted by MadMonarchist at 1:09 AM