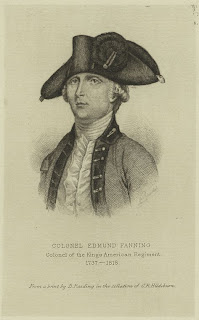 Edmund Fanning, an American loyalist who made of himself a great success in the service of the British Empire, came from a somewhat mysterious background. He was born on April 24, 1739 on Long Island, New York. Some sources say his family were Irish Protestants from Ulster, others that his parents were Captain James Fanning and Hannah Smith. In any event, he proved a bright boy and was given a good education, graduating from Yale in 1757 and going on to study law in New York. In 1761 he moved to North Carolina and there was admitted to the bar and began taking an interest in politics. Reputedly the most educated man in the colony, he was able to work closely with the Royal Governor of North Carolina William Tryon. He occupied a number of relatively minor administrative positions before coming to greater attention during the War of the Regulation. This arose out of claims that Fanning and another lawyer were guilty of extortion, a crime for which he was fined. However, the locals did not think the fine sufficient punishment and violence soon broke out which Governor Tryon was able to suppress at the head of the North Carolina militia at the battle of Great Alamance Creek on May 16, 1771.

Due to this trouble Fanning was more than happy to accompany Tyron when he was subsequently posted to New York as his private secretary. He later served as surrogate of New York City and was appointed surveyor general of the colony in 1774. In the summer of that year he was also awarded a doctorate of the civil laws by the University of Oxford. However, as rebellion brewed in New England, Fanning’s position as a Crown official, as well as his history in North Carolina, ensured that he would be singled out for particularly harsh treatment by the “Patriots”. Rebel gangs chased him from his house and he had to take shelter in New York harbor onboard HMS Asia. Sufficiently outraged he endeavored to take an active role in punishing the rebels and suppressing the revolution in America. Lt. General William Howe, British commander in North America, commissioned him colonel and he raised his own regiment of loyalist infantry known as the King’s American Regiment. Also known as the “Associated Refugees” the King’s American Regiment, under Colonel Fanning, gained quite a reputation during the war, both for their fighting prowess and their rather rough treatment of all rebels.

However, lest any think that Colonel Fanning was truly the barbarian that revolutionary propaganda made him out to be, it was he who intervened with the British forces to prevent the burning of Yale College, a fact for which, long after the war, the grateful institution granted him an honorary degree. Nor was he some soft political appointee who remained far from the fighting; in fact he was wounded twice in combat during the course of his service. The reputation with which Fanning was saddled by the American press was totally undeserved. Much of it was built on the ‘original sin’ of his conduct in North Carolina. However, most serious scholars now admit that Fanning was likely simply a scapegoat for popular discontent but this was built upon by the revolutionaries to portray Fanning as the epitome of the corrupt Crown official, exploiting the populace and then making merciless war on them once the fighting had begun.

When the war ended in defeat for the British, Colonel Edmund Fanning was forced to flee, along with other loyalists, to Nova Scotia in 1783. He became lieutenant governor and in 1785 he married and later had a son and three daughters. In 1786 he accepted what he thought was a temporary post as lieutenant governor of St John’s Island (today Prince Edward Island). His accommodations on the island were less than ideal but he persisted and in 1808 was promoted to general in the British army. He finally retired and moved to London where he died on February 28, 1818, remembered as one of the most successful loyalist governors of British North America and a leading figure in the early history of Canada.
Posted by MadMonarchist at 12:19 AM