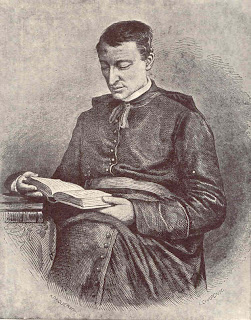 Although often misrepresented by history, Monsignor de Merode is an example of the style of devoutly religious and monarchist Catholicism that would make any traditionalist devotee of the Sacred Heart proud. Frederic-Francois-Xavier Ghislain de Merode was born in Brussels in 1820, the son of an official of King Leopold. He attended religious colleges before entering the Military Academy of Brussels in 1839. He served at Liege and in Algeria where his heroism earned him the famous Legion d'honneur. However, in 1847 he suddenly decided to change armies and exchange his sword for a rosary. He studied in Rome and was ordained priest in 1849. In 1850 he joined the Curia when Pope Pius IX made him cameriere segreto, sort of like the chief prison warden of Rome.

Merode was so successful in this position that many rulers, even some hostile to the Church, wanted to use the same policies to improve conditions in their own prisons. However, the chaotic world of Italian politics soon caused a change in direction for the career of Monsignor de Merode. By 1860 the Papal States were under attack by Italian liberals and their former defender, Napoleon III of France, had abandoned them. Austria was defeated and unable to help, and the rest of Italy had already been conquered by the Piedmontese and their allies. Msgr. de Merode advocated forming a Papal army made up of volunteers from around the Catholic world. Although others objected, Pope Pius IX was convinced there was no other option and placed de Merode in charge as Minister of War.

Msgr. de Merode attacked the crisis with great zeal, calling on the faithful to defend the Church and recruited his cousin, the famous Algerian war hero and noted French legitimist, Cristofe de Lamoriciere to command the army. Despite a gallant defense, the superior numbers of the Gribaldians and the Piedmontese proved too much for the small Papal Army. Pope Pius IX ordered only symbolic resistance so that no lives would be wasted but the world would know the Papal States were conquered rather than surrendered. Msgr. de Merode's position went away with the end of the war as the Pope went into exile in the Vatican. After the unification of Italy de Merode worked largely on projects to improve conditions in Rome, often at his own expense. However, he had attracted enemies. Some conservatives were angered by his progressive ideas while liberals opposed his zealous defense of the Church, opposition to Napoleon III and support for the legitimist monarchists.

Opposition to the Monsignor finally forced Pope Pius IX to dismiss him in 1865, but he was not about to abandon one of his most faithful servants. De Merode became papal almoner and titular Archbishop of Melitene in 1866. He was charged with distributing alms from the Papacy among the poor and confirming children who were near death. His great compassion won him many friends among the least of Roman society. At the Vatican Council, Msgr. de Merode again courted controversy by joining the minority of those who felt it was not the right time to fully define Papal infallibility, but obediently submitted to and supported the action once it was taken. After Rome had fallen to the House of Savoy he mostly restricted himself to the Vatican as well, leaving only on special errands.

Monsignor de Merode made one of his last official speeches on June 14, 1874 when he addressed a group of American pilgrims and talked about his family connections with the famous French and American revolutionary Lafayette. He spoke of his regret that the talented general had turned away from the faith, but also spoke of the great contributions to Catholicism that were being made by the nation he helped to build. Not long after, Msgr. de Merode died of pneumonia in the arms of Blessed Pius IX, only a matter of months before he was scheduled to be made a Cardinal and Prince of the Catholic Church. He was buried in the Flemish Cemetery near the Vatican with a turnout that included his fellow clergymen, statesmen of which he was also one, princes whose rights he always supported and a mass of the simple, poor people of Rome for whom he had done so much.
Posted by MadMonarchist at 12:14 AM